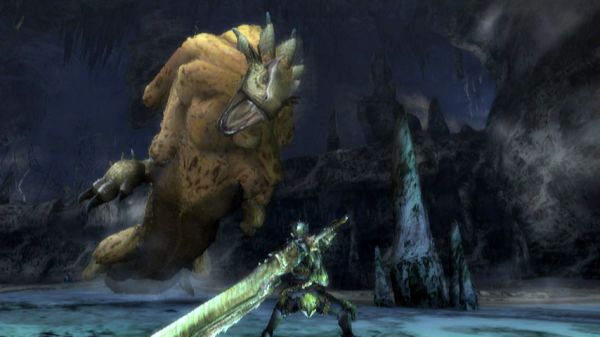 We're just one week away from Monster Hunter Tri's release on the Wii, the first major game in the Monster Hunter series to be released on a non-Sony platform, and Capcom recently announced some new features for this title to entice fans and newcomers alike.  Rather than taking the usual DLC approach to extending the game's life, Capcom has revealed that they will host special online only events once a month that players may participate in in order to face off against rare monsters and earn unique items.  Each of the events are cooperative in nature and, of course, entail taking down gigantic monsters, one way or another.

SAN MATEO, Calif — April 9, 2010 — Capcom®, a leading worldwide developer and publisher of video games, today announced support for Monster Hunter™ Tri with unique event and arena quests on Wii™. Accessible for limited time periods, the online quests extend the player experience by offering monsters and rewards only available while the quests are open. Successful completion of the online quests allow players to upgrade their weapons and armor with rare items and take them into the standard single player or multiplayer quests. Based on a cyclical schedule, event quests will be available multiple times offering a number of opportunities for players to experience them. A schedule of event quests will be updated on Capcom’s community site, Capcom Unity at www.capcom-unity.com, on the first Friday of every month.

Event Quests
Up to four players can band together online to complete the Event Quests. The Event Quests offer a variety of challenges on an ongoing basis, cycling monsters of varying difficulty. Aspiring hunters must meet the required hunter rank in order to participate in these quests or work to level up their characters by hunting monsters in either the single player mode or standard online multiplayer mode and attempt to participate when the desired post launch quest appears again. Specialized weapons, including three designed by Capcom’s community members, can only be obtained by participating in Event Quests.

Gigantic Monster Quests
Gigantic Monster Quests, a distinctive event quest, are only available for one day at a time. Pitting players up against the rare and challenging Jhen Mohran, gigantic monster quests find players on a ship as they battle the massive beast, firing cannons to draw the monster close before attacking at closer range with their customized weapons.

Arena Quests
Arena Quests pit two players against solitary monsters in varied coliseums. Hunters work together to take down the specific massive beasts in either a traditional Monster Hunter style or in a time attack style, offering a higher chance of acquiring value rewards based on how quickly the monster is defeated.

The Arena Quests sound like a kind of survival mode where two players are continuously pitted against monsters until they fall or they make their way through all the challenges.  The Event Quests seem like they could be interesting depending on what the "variety of challenges" entail, which hopefully will be akin to the challenge provided in the Gigantic Monster Quests.  Battling gigantic monsters on the high seas while using the ship's cannon?  I'm feeling a little piratey already.

I know we have a few Monster Hunter fans out there, so what are your thoughts on Capcom's approach to this non-PS2/PSP Monster Hunter title.  Do these quests appeal to you?  Does this seem like a better approach than DLC, which hasn't found much of a market on the Wii outside of Rock Band and Guitar Hero?  Are there other things you'd like to see Capcom offer as far as online support goes?