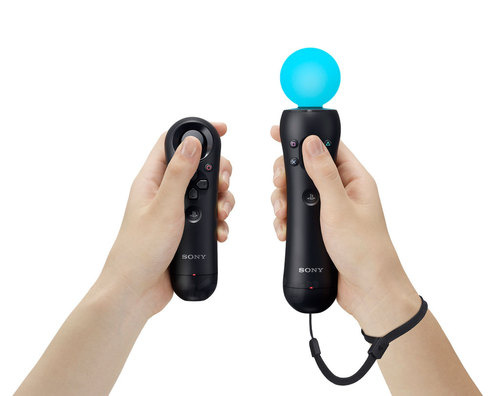 Last night at the Game Developer's Conference in San Francisco, Sony officially unveiled their motion controller for the PlayStation 3.  Called PlayStation Move, the controller consists of a want with a colored ball at the top and a "sub controller" that works in tandem with Sony's EyeToy camera.  You aren't dreaming, it's almost identical to the Wii in execution.  Though official pricing hasn't been announced, we've heard that  $99 for a starter kit that includes a controller, sub controller and camera will be available.

What exactly makes the Move different than the Wii-mote?  There's a few things, for one, it's completely wireless.  Both remote and sub controller  are independent of each other with no tethering, which should allow for more freedom in games.  Both controllers are extremely light, based on the hands on impressions from GDC.  This is because instead of AA batteries, these remotes have built in lithium ion batteries that are charged via mini-USB, much like the PlayStation 3 controllers.

But what about that glowing orb thingy?  Apparently that's key for sensing the movements of the controller, and in fact, it will change colors based on the environment to allow for more accurate detection.  According to first hand accounts, all of this means you don't need to "point" at the TV to have access to movement like the Wii does. But what does this mean for co-op gamers?  In the short term, not a whole lot.  Though we're already seeing some announcements of Wii titles being ported to the Move.  This may bring us more on rail shooters like House of the Dead titles and others running on next-gen hardware.  Sony has already announced SOCOM 4 from Zipper Interactive supporting the Move, problem is, these kind of games aren't really conducive on supporting more than one player at a time, usually made up by an "assist type co-op."  You know, BYOB.

There's a handful of other official titles announced from Sony so far, most seem to be similar to what's already out there in terms of motion controlled games.  You have some fighting games, a gladiator game, short sports titles, table tennis, and party games.  None of these titles have co-o exclusively.

Only time will tell just how successful something like this can be.  With the Wii the console was built from the ground up around motion control, it was the only option.  To introduce something like this a few years into the life cycle, and make it successful, is incredibly hard to do.  Still, Sony has over two dozen publishers on board to create games utilizing the technology, and most will still offer standard control as an option.

Which of course brings up the question - do we even need motion control in core game experiences like SOCOM 4?