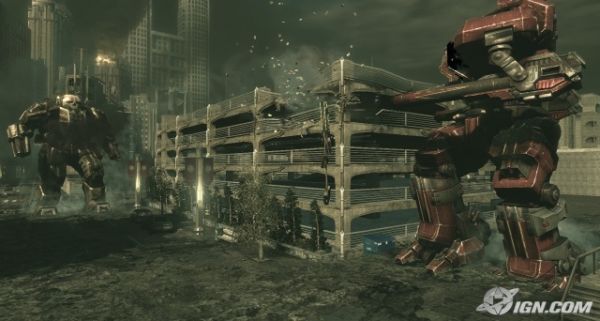 After seven LONG years, fans of giant robotic battles will get the game they've so desperately wanted.  Today IGN has the exclusive announcement of MechWarrior, a complete reboot of the series.  The game is being produced by Jordan Weisman, one of the original creator's of the BattleTech universe, and co-founder of Smith and Tinker.

MechWarrior is being developed by Piranha Games, who's most recent release is the Transformers 2 video game.  Giant robot battles are fresh in their mind it seems.  The original MechWarrior titles on the PC in the late 90's were quite different from the MechWarrior titles we saw on the Xbox a few years ago.  These titles were more simulations than hardcore action titles - and from the IGN video - it looks like we'll get the best of both worlds.

The current plan is to have a single player campaign as well as a four player co-op campaign, topped off with a little multiplayer goodness.  In the IGN interview with Russ Bullock, one of the lead developers, he had this to say regarding co-op:

We’re really aiming for four player co-op, I really want to see the possibility for anywhere between one and four. Again, these are just initial thoughts, but similar to how in Gears of War, you can go through the entire campaign with someone or not. We’d like to have that – I’d love to see you going through that.

We can’t imagine hardly a better property for it: when you think of a lance as four mechs, we have an opportunity here to have a four-player lance, all with player controlled mechs and utilizing all four classes of the mechs in the universe from light, medium, heavy, and assault...

He went on to say that the entire MechWarrior IP is very well suited for cooperative play.

There's no publisher yet, but the game is being developed for the PC and Xbox 360. Sadly there's no release date or timetable for a release yet.

The video claims to be all in game footage, if true, it won't be long before someone snatches this up.  There's a strong core fanbase here eagerly awaiting this title, it'd be silly for someone to not snatch it up quickly.