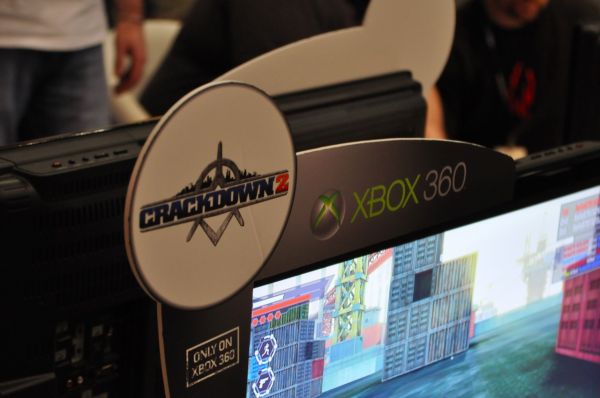 Microsoft had two modes of Crackdown 2's multiplayer on display - sadly neither of which were co-op.  Rocket Tag and Team Deathmatch.  Nick and Jason each played one of the modes and came away with their impressions from PAX East.  How does multiplayer work in an open world game like Crackdown?  Read on to find out.

Fans of Halo 3's OddBall mode will be right at home with Rocket Tag.  The objective is to hold the orb as long as possible without being tagged by "rockets."   The maps are smaller pieces of the larger Pacific City - the boundaries are visible as semi-transparent grid walls.  Like the main game, Rocket Tag is a very vertical mode of play, something that you won't find in Halo 3.

It's quite obvious right from the get go that Rocket Tag is nothing short of organized chaos.  You need to be constantly on the move, constantly firing, and constantly looking over your shoulder.  With a proper sound system you'll hear the impending doom of the rocket coming in on you.  If there's one thing you'll need to remember is - it's ok to die, because you will die - a lot.

The match I played in lasted for 10 minutes and the chaos never let up that entire time.  Holding the orb for anything more than 20-25 seconds at a time is a major victory for yourself, and as soon as you pick it up you'll quickly be looking for an alley to hide in - or  - a jump pad to hit to launch yourself away from the incoming rockets.

Overall the mode is a lot of fun, and it can definitely be a nice distraction from the single player or co-op. Helicopters: fun in single-player AND multiplayer!

Crackdown 2's Team Deathmatch mode is pretty much what one would expect from a deathmatch mode in an open world game.  Two teams of super-powered humans run around a small area that's a part of the larger city, as in Rocket Tag, shooting, exploding, kicking, and generally murdering the ever-living daylights out of each other.  While you start off with some basic guns and a grenade pack, there are plenty of other weapons lying around the arena to assist you in raining death upon the opposing team, like a rocket launcher that fires homing rockets and a mini-gun.

However, it's not just weapons for which you should be on the look-out; cars, buggies, and even helicopters are available to agents that are able to track them down first and make use of them.  In the play session I was in, I wasn't able to actually get into the helicopter (someone else got it first and after they died it ended up in an awkward position that prohibited access), it was a pretty awesome sight to see a helicopter lifting off the ground and come barrelling at you.  Even more awesome, though, was the feeling of taking it down.  Another interesting game changer is the new gliding mechanic that you can use by pressing the "Y" button at the top of a jump.  While it does make you a bit more of an easy target for the opposing side (players are able to lock on to one another just as they can lock on to enemies in the game), strategic use of it can net you some strategic vantage points over the competition.

The one issue I had while playing was that the whole "team" part of Team Deathmatch felt removed due to the environment in which my fellow teammates and I found ourselves.  Even if we did know and were able to communicate, however, I never felt like teamming up with someone would provide me with any real advantage.  Two players are able to spot more and cover each other's backs, but when one guy with a rocket launcher fires a rocket at even one person, both players are going down.

In the end, players that are a fan of this kind of competitive multiplayer mode will likely enjoy Crackdown 2's Team Deathmatch, but personally, I preffered the crazy chaos of Rocket Tag.