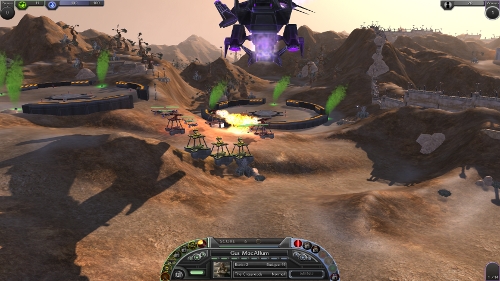 The people have spoken, and Cadenza Interactive has responded.  True to their word that they listen to every bit of feedback they receive, Cadenza has responded to their community's requests and have released a patch that adds campaign co-op to the PC version of Sol Survivor, the co-op tower-defense title that was previously an XBLIG only title.  Haven't had a chance to check out Sol Survivor yet?  Well, Cadenza has provided us with three Steam keys for the game to giveaway to three of our lucky comunity members.  Keep reading for the details.

The new Campaign Co-Op mode will allow two to four players to play through the entire campaign via LAN or Internet through Steam and Impulse's network.  Each player will be able to select his or her favorite XO at the start of each mission, and will have full access to his or her turrets and support powers.  The campaign will alter the number and types of creep that come with each wave depending on the number of players that are teaming up to ensure it's always a challenge.

We also spoke with Dylan Barker, Cadenza Interactive's Community Manage, about this new addition to the game, and he shared with us the following:

As community manager, I wrangle up all of the forum activity and pass it on to the team.  The demand for more co-op was overwhelming!  We saw some specific requests from the community to play the campaign on co-op mode, and that got us thinking about how to actually do it.  A week later, we had a balance fleshed out, and today we're passing on Co-Op Campaign multiplayer to the community.  It's a big 'thanks' to all community members supporting us by word of mouth, and hopefully they enjoy it!

We're certainly not ones to complain if developers decide to listen to their community and add co-op to their game.  In fact, we can't help but wish that it happened a little more often.  The patch for Sol Survivor that adds the Campaign Co-op mode is now live and will be applied the next time you start up Steam or Impulse.

Contest time:  If you are interested in winning a Steam code for Sol Survivor, simply leave a comment below.  We'll draw three winners on Friday, April 2nd 2010 at 9AM EDT.