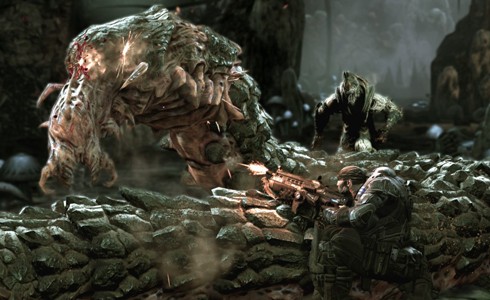 We know you're probably looking forward to the release of Gears of War 2 this November.  However, it looks like you may want to pop in the original for a bit and make sure you've got all those achievements.  Joystiq gives us some information from the recent Comic-Con, straight from Cliff Bleszinski.  He announced that earning achievements from Gears 1 will unlock certain features in Gears 2, like extra playable characters, for example.  At this time, it is unknown which achievements he is referring to.  You may just want to get as many as possible in the meantime.  Personally, I think this is a pretty neat little bonus for those who have played the first game, though I certainly hope there's an alternate way to get these same features unlocked.

Another tidbit that was dropped was a limited edition Lancer bundle, which would include a replica of the famous Gears weapon.  Microsoft has since declared that the bundle is not from them, so it must be a retailer exclusive, and most likely Amazon.com.  We hope to have more information about this soon, so you can have a chainsaw gun for your every own!!