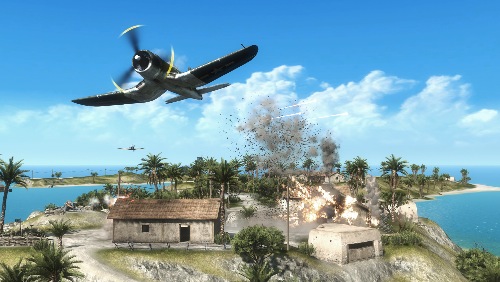 Major Nelson has announced the winners for the 2009 Xbox Live Arcade awards, which were voted on by the community.  While Twisted Pixel's `Splosion Man won for best original game, it was the only co-op game listed in the winners despite Battlefield 1943 somehow managing to win the "Best Co-Operative Multiplayer" category.  Battlefield also won "Best Competitive Multiplayer," which by all accounts, is well deserved.

We've covered Battlefield on this site a bit, we gave a preview of the game from the New York Comic Con earlier last year, Jim reports on it from his Battlefield report, but we've been pretty clear that there's no co-op modes to be found in DICE's team based shooter.  And that's exactly what it is, a team based shooter.

Perhaps we need to revisit the excellent Co-Op Terminology Guide for a refresher.

It's a bit odd for sure, there were 27 Xbox Live Arcade Co-Op Games released in 2009.  Excellent titles too like: Madballs in...Babo Invasion, Alien Breed Evolution, Invincible Tiger: The Legend of Han Tao, and the aforementioned `Splosion Man - which was our runner up for Downloadable Co-Op Title of the Year in 2009.

So remember folks - any time you have human on human action - it's not co-op.