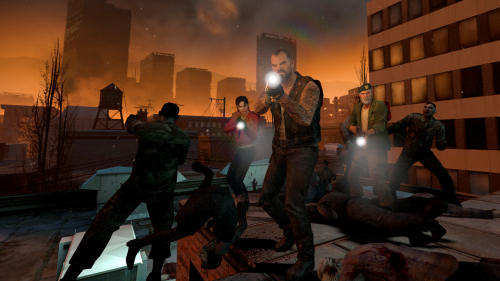 It's a sub-genre that's been around since the dawn of the arcades.  But co-op has only recently gone mainstream to the lengths of having entire games built around it and bullet points on the back of boxes.  Now from Triangle Games Conference comes a panel on the future of first person shooters.

So while most of the panel agreed that Uncharted 2 was the best game they've played in recent memory, despite missing a core co-op component, it was the next question that shows just how popular cooperative play has become.

Farnsworth next asked which game elements or features are going to be the most important in moving the genre forward. Is it story? Characters? Interactions? Multiplayer? Relevance to contemporary events? Without exception, all the panelists agreed that cooperative play is the most important element in developing and sustaining the popularity of the shooter genre. McGann says it's part of leveling the playing field for players like himself who aren't competitive enough to enjoy adversarial play. Co-op also allows players to create an unscripted story where their own actions determines what happens. Six Days in Fallujah from Atomic Games will feature co-op play start t finish, if it's ever released.

Surprisingly though the panelists said story took a backseat, and the co-op itself was generating it's own story within the games.

McCabe not only agrees but takes things one step further. Left 4 Dead, he claims, really has no story. Described purely as a single-player game, Left 4 Dead doesn't think it sounds very appealing to him, but the cooperative gameplay is the hook that makes it all work. Given the success of Left 4 Dead and other cooperative shooters, it's no longer an optional feature; it's something that consumers demand. Benito was hopeful that cooperative play might extend to other platforms and even speculated that one day iPhone or Facebook games might have a cooperative tie-in to more traditional console games.

I think it's quite good to hear that developers are realizing that gamers truly desire co-op play in their games.  Do they, or we, demand it?  I think that's a bit strong.  But when you design a game that for all intents and purposes appears to be cooperative and it's left out - that's when we get in an uproar.

I'll look at the recent Battlefield Bad Company 2 for inspiration on this.  The game in almost its entirety is played with a squad of soldiers controlled by AI.  So why isn't there co-op play?  Because the team at DICE decided to throw in that old schtick level of "suddenly you find yourself alone separated from your squad."  This becomes an excuse for not including co-op as one level out of 20 has this style of game play.  Why even include it at all?  It's so cliche, it feels so forced.  In my opinion this simply an aged design decision, a fear to break away from the tried and true game designs of old.

Perhaps panels like this bring to light just how important cooperative gaming is, and will challenge developers to try something different, creating deeper and richer gameplay experiences that can be shared not by yourself, but with friends.