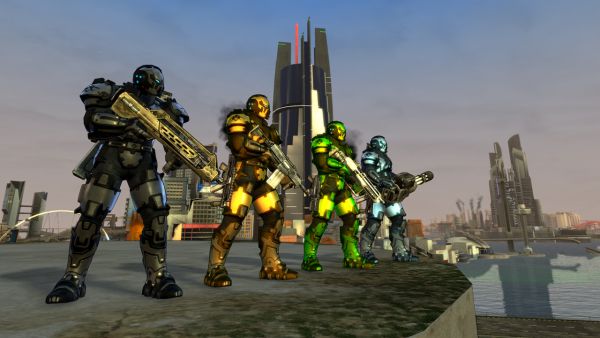 This week in co-op, I played the Crackdown DLC titled "Keys to the City" with internet personality Keadin. This DLC was by far the strangest, most unique, and most pointless DLC I've ever played - and I loved every second of it. Follow me now through the gates of Paradise City using their own Keys.

Believe it or not, there is a car under that pile of exploding barrels - well, kind-of.

The list of stats on the left side of the above screen shot are your skills. You can raise or lower any of these skills at any time, changing the dynamic of gameplay. You can also use the menu on the far right side of the screen above your weapons to spawn, or change any of the levels in a variety of ways, including the time of day. Any of these settings, mistakes, ruined missions, angered factions, or any progress in your story are not effected in the long term. So, why not? Go wild!

"Keys to the City" basically just refers to a free-mode where you can adjust your characters stats on a whim, spawn weapons and cars, and even create environmental things like barrels and ramps. At first I spent my time searching for Orbs, scaling high-up buildings, etc. Basically playing the game the way I would normally. Then, we discovered rocket tag - which is full of rockets. And tag. Tagging each other with rockets.

Wholly satisfying, but the insanity was just getting started. Later in the night we began playing dominoes with the exploding barrels. One of us would spawn barrels while running down the street, while the other would shoot the first barrel, then follow to watch the chain of explosions. Eventually we discovered that if you're character was too awesome and had a cranked up speed - you'd outrun the explosions by far too much, ending the chain and causing the burly agent to cry a little.

It may not look like much, but that is one exploding car that was launched into oblivion with rockets.

We took a few sob breaks after our exploding barrel dominoes went quiet, and continued to explore the far reaches of either end of the city, swimming as fast as possible, and spawning cars on each others heads. Spawning cars gave me Handcock inspired dreams, and I began to ascend to the highest buildings to place cars on the very edge to look down at the people. Spawning cars was all good and fun, but it only really got interesting when we began spawning barrels first, then spawning a car on top of the barrels, and - well, the result was explosive.

Cars flying through the sky ablaze brought another tear to our eye, so we started to chain events. Explosions, driving, launching over the edge of buildings through ramps - the possibilities were nearly endless. Especially when the carnival attractions and sports came to light. Carefully stacking barrels, Keadin created a few attractions to bowl over. It was a fun game for quite a while, if a bit tedious to set up. We were also kicking barrels at one another and trying to either shoot them before they hit, or kick them back. Like kick-ball, only dangerous.

Stacking things like vehicles and other interactive objects had a few - er - side effects. Music and potentially visuals not safe for work!