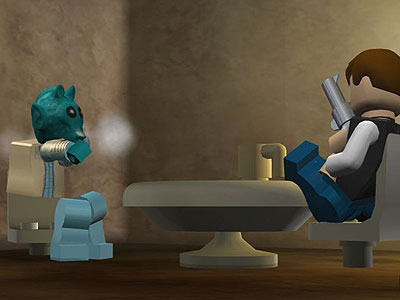 The current LEGO video game franchise is quite good. The LEGO games are nicely balanced, with appeal to both young kids (who love LEGOs) and adults who grew up with the series that has been LEGO-ified (Star Wars, Indiana Jones, etc.). So, after a hectic week (so hectic that you will notice this column has been posted a day late), I figured some nice LEGO action was good for me. My game? LEGO Star Wars II: The Original Trilogy. Did I have fun and relax? Oh yeah.

The LEGO games have to be made carefully, since they have to appeal to a variety of people, as I said earlier. However, I have found that the games pull this off well. True, the games do not have the complexity of an action game like Assassin's Creed or Super Mario Galaxy, but the games never try to be like those games. Instead, the games follow the "simple gameplay + co-op = fun" mantra. And this works for the most part. For example, in LEGO Star Wars II, you goof around in a cartoony Star Wars universe, but at the same time, you can unlock a huge variety of goodies. All that is fine, but we really care about the co-op, right?

The only bummer for me is that LEGO Star Wars II lacks online co-op, but I have a feeling that it wouldn't be as fun as local co-op. My best co-op experiences are those that are done locally, and LEGO Star Wars II was no different. One of the best parts about the game is its sense of humor; it's almost as if the game knows that it is subtlety spoofing the Star Wars movies. However, the humor particularly shines in co-op. The fact that you can utterly destroy your teammate with no real repercussions is truly great. In fact, my buddy and I often had more fun beating each other up than we did playing the game.

However, even though the game is very funny, it still has that sort of epic feel that Star Wars has. Sure you are fighting in a cartoon world, but you are doing so with the characters that you love from Star Wars. I mean, if you can make a game where you and a buddy can play together in one of the best movie series of all times, you have something good on your hands. While playing with my buddy (another Star Wars fan), we sort of geeked out in some ways, like "oh, the cantina scene" or "wow, I can't believe they added that from the movie." The game stays pretty true to the series, often surprising you with details you might have forgotten. And it does it all with no dialog.

The best thing I can say about the game from my week playing it is this: the game is pure fun. Sure the game isn't super complex, but some of the best co-op games are not complex. In our modern gaming world, with our advanced AI and photorealism, we often miss the point. Games are made to be fun. Yes, it is great to have a near perfect recreation of New York City (I still love you, GTA IV), but great graphics and advanced programming aren't the end-all, be-all. Casual games, I have discovered, can be pretty darn fun. LEGO Star Wars II isn't the next great action game, but it is one of the more fun co-op games that you can pick up and be having fun in minutes.