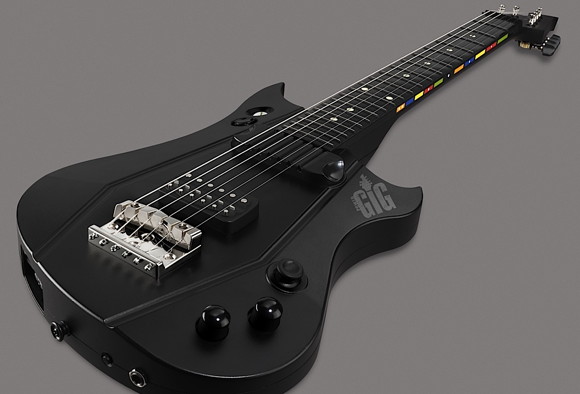 Abbot and Costello, Peanut Butter and Jelly, Pork and Beans: apart from each other, they are acceptable, but combined, they turn into something far better.  So what would happen if you took an actual, functioning electric guitar, and combined it with the fake plastic doodads used to control music games like Rock Band and Guitar Hero?  You'd get something like the Power Gig guitar, shown above.

How does it work?  Say you are done jamming with a buddy, so you unplug the Power Gig guitar from your amp, then head to the living room to play some Rock Band.  A quick flip of a trigger, and a mold flips out, holding the strings in place, and you can then use the guitar as a controller as you shred away to your library of music games.  It sounds interesting, to say the least, and there's no denying the sexy, glossy appeal of the full sized guitar.

But Power Gig isn't just a guitar/controller hybrid to use in other music games on the market; it will be released with Power Gig: Rise of the Six String, a new game that will add in features that Guitar Hero and Rock Band can't.  Chords will require not only a button press, but specific strings, too.  And power cords will be even more finger-tangling, approximating the difficulty of real guitar playing.

Seven45, the developers of Power Gig, don't claim that playing their game using the nifty guitar will make you a true-life rock hero, but it sure looks like the next best thing to it, as of right now, in the music game genre.  I don't know if I'm interested in laying down the cash for yet another guitar, especially one that will probably be quite expensive, but you have to admire the innovation that the music game genre so desperately needs.