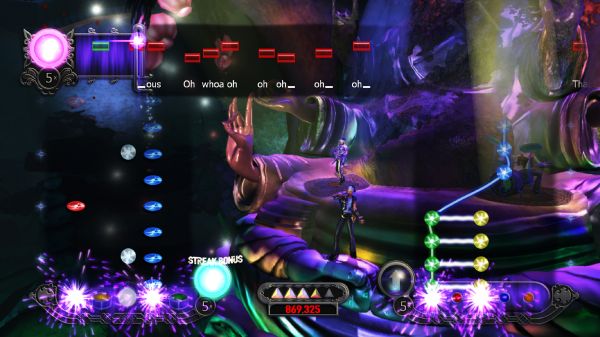 As we mentioned earlier today, there's quite a few music games coming out this fall.  One game though that's doing something a bit different is PowerGig: Rise of the Six String.  Like Rock Band 3 and its pro mode, PowerGig is looking to add something to a stalling genre by introducing ways to learn how to really play the instruments.  Best of all, it's out now.

The core learning mode in PowerGig is called chording.  In it the game teaches players how to hold their fingers on the guitar to play actual chords.  It won't make you a rockstar, but you will get the basics down of learning to play.  The guitar also doubles as an actual working guitar that you can plug into an amp - that means your $170 investment isn't just for one game, you'll get a real working instrument out of the deal.

But guitar isn't the only mode of play in the game, there's full co-op support for three players with lead guitar, drums and vocals.  This can be done through any of the game's modes including a story based mode where players can choose from six characters to overthrow the oppressive headliner.

Speaking of drums, there's an optional drum kit with the title that is a bit different.  It's called "air drums" and it's exactly what you think.  You won't be hitting physical drums, instead a unit sits down at your fit and you can drum in mid air - with the game able more closely mimic kits of real drummers.  We're just as skeptical as you.

Finally a music game isn't a music game without the music, luckily PowerGig has some big headliners like Eric Clapton, Dave Mathews, and Kid Rock.  We've got the full track list below.

PowerGig is also compatible with existing Rock Band and Guitar Hero instruments, so if the pro stuff doesn't interest you, you can still rock out to some Eric Clapton on your Xbox 360 or PlayStation 3.

The full track list for PowerGig: Rise of the Six Strings: