After having looked at some more recent fare in the past few weeks, Co-Op Classics will now focus its attention on the golden age of the arcade.  Back in 1991, the side scrolling brawler was the undisputed king of co-op.  TMNT: Turtles in Time, the Dungeons and Dragons series, and X-Men: The Arcade Game all came from this time period.  While reliving these old glory days with some friends via MAME, we stumbled upon a beat em up masterpiece: Vendetta.  I don't think I have played a more unintentionally funny game in my entire life!  After reading about it, I am sure you will agree. I won't focus on gameplay too much when talking about Vendetta.  What you see is really what you get.  You move, you punch, you kick, you beat up bad guys; it's very simple.  Vendetta truly stands out, though, in its over the top nature.  The characters, the boss battles, and the not so subtle innuendo all combine to crank it up to eleven, if you will. 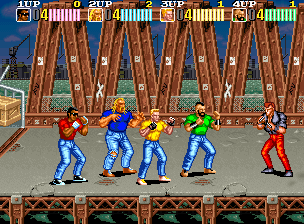 In Vendetta, you don't have your stereotypical palette swapped player characters.  No, these fellas are oozing with personality, albeit ripped off personality.  The red player is a dead ringer for Mike Tyson.  The green guy is basically white Mr. T.  The yellow fellow is the only one who isn't obviously based on a real person, though some claim it might be Jean Claude Van Damme.  Of course, the most blatant doppelganger is the blue dude, who is Hulk Hogan through and through.  Each of these guys has different moves when beating up fallen opponents, which is really quite fun. The sheer number of available weapons in Vendetta is quite satisfying.  Whips and chains add to your reach, and the ever popular Molotov cocktails are always good for torching your foes.  Clubs and shotguns are available as well.  But the best was the whips, for sure.  In one stage, strippers come out from their nightclubs, with whips in hand.  You can, of course, knock them down, take the whip, and use it to make sure they don't get up.  Whips and strippers in a game is cool enough, but when you add the pimps in, and the crazy dogs, well, it's gaming gold! 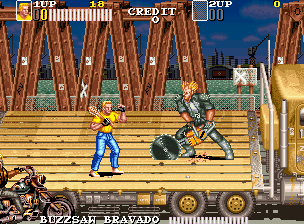 At the end of each level is a boss, as you would expect.  However, the bosses, like the other characters in the game, are... interesting, to say the least.  One is a leather bound punk with a huge buzzsaw on his arm.  Another is a warrior wielding some sick pickaxe type weapons, and throwing ninja stars.  The best, though, is the docks boss, who wields a HUGE FREAKIN' ANCHOR to mess you up with.  Good times, good times. 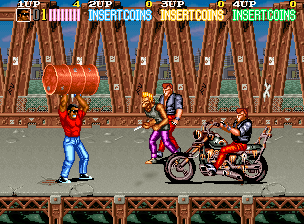 As cool as the bosses are, the best part is when, on the last level, you have to beat each of them, again!  If memory serves, they come in pairs, making them that much tougher to whoop up on.  The final boss is as cheap as they get, having a machine gun that he uses on you, in addition to a cheap shot attack using some dust or smoke type substance.  The last level feels like it was designed by a 13 year old kid who had been freebasing Kool-Aid and Pop Rocks for a week.  In other words, exactly like something I would enjoy.

To my knowledge, Vendetta is only available as an arcade game, or through an emulator like MAME.  That's a tragedy, really, and one that should be corrected.  I'd love to see it hit XBLA or PSN and hear the anti-video game groups start whining immediately about it.  It may be totally irreverent, politically incorrect, and hyper violent, but Vendetta is easily one of the most enjoyable 4 player co-op games I've ever played.  The gameplay is merely average, but the flavor is what really makes it special.  Vendetta is a co-op experience like no other, of that you can be sure.