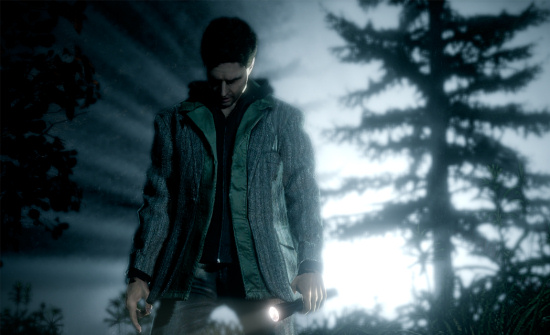 Alan Wake has what industry folks like to call, "a long development cycle."  Announced at E3 2005, Microsoft and developer Remedy had ambitious plans not only for the game graphically, but narratively.  Story wise it's been compared to Twin Peaks, LOST, and a Stephen King novel.  Graphics, the game was originally billed to show off DirectX 10 and Windows Vista, now five years later the game isn't even touching PCs.

I'm extremely limited to what I can say in this preview, and honestly, I'm kind of glad.  I don't want to ruin any of the game for you, and going into it with a clear conscious probably helped me a bit.  It's been years since I've really paid attention to what Alan Wake would offer, and now I'm almost sad I didn't pay  more attention.

The game is broken up into Episodes, much like a TV series, complete with "last time on Alan Wake" style intros.  Last night I finished Episode 1 called "Nightmare," which introduces us to Alan Wake, a famous author with a bad case of writers block.  Alan is with his wife Alice on the way to Bright Falls for a vacation, at least, he thinks it's a vacation. As you begin to unravel the mystery of just what's going on in Bright Falls, you - that is the player and Alan Wake - are twisted and turned into exactly what reality is.  You're never quite sure whether your are dreaming or what you're seeing is real as you begin to as you walk around this Washington inspired small town.

So while things start in a dark nightmare, you wake up to a bright and beautiful view of the town and Alice.  Alan and Alice check into an island cabin and settle in for a quiet night.  But like any married couple, a good fight leads to Alan walking out, only for Alice to disappear.  As Alan tries to "save" her he's suddenly woken up a week later, behind the wheel of a car that's just been in a crash. Groggy, disoriented and with no way to find his missing wife, Alan sets out to find help.

Armed with a flashlight and a revolver, your first journey takes you through dark and dangerous woods and lumber yards to reach a gas station.  It isn't long until you meet up with "The Taken," corrupt townsfolk who are overcome by some evil or darkness.  To dispatch these creeps you'll need to use your flashlight in combination with the revolver to first break the darkness shield and then kill the host.  While handling one of them isn't so bad, once these creepy creatures, surrounded by a dark and wispy shadow, start coming in greater packs you'll find yourself challenged.  Especially when reloading ammo and changing batteries come into play. There comes a moment in the first episode where you'll feel as if you've entered a David Lynch movie, realities cris-cross, flip upside down, and everything you think you know suddenly comes into question.  It's at that moment the music kicks up, the title slams onto the screen in LOST fashion, and Episode 1 comes to an end.

Just like the aforementioned LOST you'll say to yourself, "OK, what the hell just happened?"

And then you'll be giddy to start Episode 2.

Alan Wake is a SINGLE PLAYER only game- NO CO-OP - but we'll still have a full review next week as part of our Beyond Co-Op Coverage.