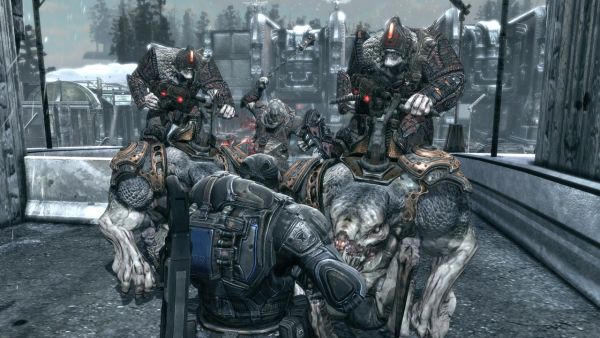 Let's gather round and all be friends

If all the news about the 2011 release of Gears of War 3 has not convinced you to unpack Gears of War 2 for a replay, the latest patch from Epic may be just give you the push you need.  Versus is not the first port of call for Co-Optimus when playing the game, but the patch may just draw us in as it is a far more social affair.  Added to this is an easier way for you to jump in and help a friend in Horde.  These changes come in the new match option called 'Social XBOX Live'.

This mode will allow people to drop in and drop out of any game type.  For fans of the co-op Horde mode, the new Social Horde allows players to join at any point in a player match or be invited into a ranked match.  The player who has joined will receive XP from the moment they arrived, meaning they will not get quite as much as their allies.  The ability to join a game of Horde midway through should stop the need for gamers to quit out and start afresh when a friend comes online.

The new game mode is also likely to benefit the more relaxed Gears versus player by encouraging a more friendly style of play e.g. if the other team drop out in a rage there is now an opportunity for other players to replace them immediately.  Also, you will no longer have to wait for a match to end before your friends get to play.  As soon as they arrive they can get down to gaming, rather than having to watch the rest of the current match.  Epic have also relaxed the penalties for people quitting out of the new social matches, they won't receive XP if they leave, but will not be penalized further with negative XP or a quit out count.

I have always found the versus mode of Gears of War 2 a little intense for my liking, but this new system should lead to more relaxed games where people play for fun, as much as for the win.  However, there is a sting with the new Patch; it only opens up for those players with the 1600MSP All Fronts Map Collection.  Epic promise that this pack will be available on offer soon, but should people who own the original disc be disadvantaged?

Title Update 6 fixes these possible exploits, where under certain circumstances:

Title Update 6 fixes these other issues as well: