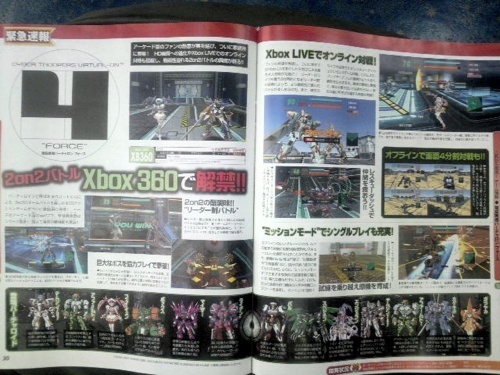 The above pictured Japanese magazine has officially leaked the full game co-op title Virtual-On Force, which is similar to the XBLA version "Virtual-On Oratorio Tangram," only bigger and more co-opey. Virtual On is Sega's version of Armored Core - giant mechs, guns, explosions, etc. The arcade game is a world of fun, but Kotaku has the scoop so far on what the full game will contain.

"The game, of course, will feature online play via Xbox LIVE and 2-on-2 "Leadership Org Battles". For online, the screen can even be split for four players. There is a co-op play for giant boss battles, and there's a single player mission mode, too."

Sounds a little bit like two-headed giant from Magic: The Gathering, only massively action-oriented. Hopefully Sega will give us the official rundown when the countdown clock on their website finally runs down. Approximately 5 days until the "official" announcement and details of Virtual-On Force hit us.  I'll be dreaming of piloting mechs until that time.