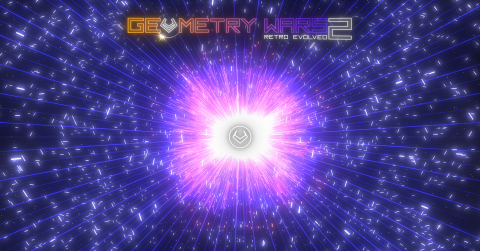 Apparently August is going to be the month of casual and arcade games for me. I've played some Lego Star Wars, some Rock Band, and now I'm playing Geometry Wars Retro Evolved 2. The game has many of the signature features of good casual/arcade games. Its gameplay is not too complex and you can play it for ten minutes (or less, really) and have a blast. However, like the best casual and arcade games, it still has depth and soul.

I mainly play Geometry Wars RE 2 on single player, but that didn't stop me from teaming up with a buddy to play some co-op. Once again, my single player snobbery was utterly set it place. The fact is that the game is much better when played in co-op, and that really is saying a lot. This is because Geometry Wars Retro Evolved 2 has what I consider the trademark of a good co-op game: seamless integration of a second player.

For 800 Microsoft Points, you get a lot of game. Not only do you get single player, but also co-op and competitive multiplayer. But co-op is our focus, and thankfully, Geometry Wars RE 2 has a boatload of co-op modes. You can play all of the single player modes in co-op, though they are slightly modified. However, also have two different ways to play. Either you can play with two individual ships, but you can also choose to have one ship, where one person drives the ship and the other one fires the weapon. It takes me back to the days when I played shooters with my cousin. He controlled the movement of my character, and I fired the weapons. So it's nice to have a sort of throwback to the good old days. But enough talk. How does Geometry Wars Retro Evolved 2 play in co-op? Excellent, of course.

Geometry Wars RE 2 might just be the best co-op game available on XBLA or PSN. The fact is that if you take an amazing single player game and can somehow seamlessly add another player, the resulting game will be epic. And that is what Geometry Wars RE 2 is: epic. My teammate and I had loads of fun, not just from running around and shooting enemy ships. One of the fun parts of the game, I discovered, is the simple-but-necessary teamwork. You cannot just fly away and shoot enemies with no regard for your teammate. You need your teammate, and he needs you. But it's not a bad thing, since after all, Geometry Wars RE 2 can get pretty crowded with enemies. That's when the teammate comes in handy. He can cover your back, while you cover his. It's pretty fun, and not too complex, really.

My teammate and I discovered that of all the modes, though, King is both the "most co-op" and difficult. King mode is complex to explain, and somewhat complex to play. In the mode, you can only shoot in certain circular "safe zones," which you enemies cannot enter. However, you can only fire while inside the circular zones; outside of the zones, you have no weapons. The key in this co-op mode is to have both you and your teammate in a safe zone. This is more difficult than you think, since the zones are not that big, and they disappear after a while. The result is a sort of freeze tag/hide-and-go-seek game, which is rather fun, to be honest.

The sheer depth of the co-op options in Geometry Wars RE 2 is stellar. Really, my teammate and I played for a long while without ever getting bored. I mean, you have six different modes to play, and you can play all but one of them in two different modes (the two ships or one ship). And keep in mind, we only played with 2 players, not the maximum of 4, which has to be incredibly epic. Frankly, Geometry Wars Retro Evolved 2 is my favorite arcade shooter game. Of all time. I'm not a big fan of the games, really. Yet, there is something great about Geometry Wars RE 2. Maybe it's all the different modes, or maybe it's the enclosed arena that makes it feel claustrophobic and fun. But Geometry Wars RE 2 is fabulous for co-op fans, and is a great investment for ten dollars.