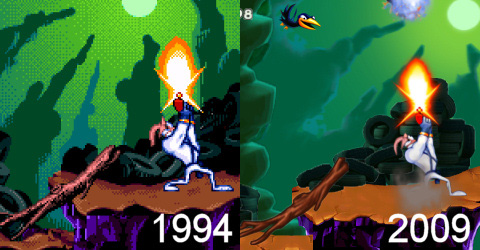 Holy Oligochaetas!  It appears as if the HD remake of one of the greatest Sega Genesis platformers, that's Earthworm Jim,  will not only be getting spiffy updated graphics (shown above) but it will be adding a four player co-op mode!  The game was delayed from a 2009 release in order to add the co-op mode in.

This at first started as a rumor, thanks to some leaked achievements that had multiplayer text attached, but has since been confirmed by an interview on the website 8th-Circuit.com with the game's developer.  According to the interview, co-op isn't the only thing added, with new levels, enemies and other goodies to be experienced by a whole new generation of dirt lovers.  Hopefully we don't need to cut Jim into four pieces to enable this co-op mode.

Color us very excited for this one, we'll have more info on Earthworm Jim HD soon - it's planned for XBLA and PSN release this summer.