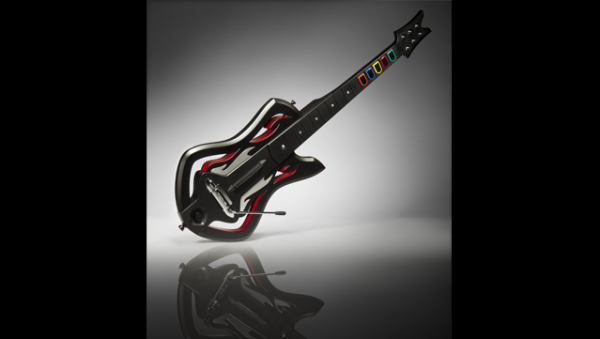 Last year, the Guitar Hero brand was a bit too prolific.  That seems to have changed in 2010, with but one Guitar Hero game on the horizon.  All sorts of information has been revealed about the next Guitar Hero, subtitled Warriors of Rock.  Releasing this fall, Warriors of Rock will have a new "story-based" Quest Mode, narrated by none other than Gene Simmons.  Co-op would seem to be a point of emphasis in Quest Mode, as players "join together" on an epic journey to save rock and roll.

More music on-disc than any previous GH game is promised, as well as new challenges for the all previously available DLC.  If that means what it sounds like, all your GH5 content as well as imports from other GH discs will be available, which is quite nice.  A hot new guitar controller, pictured above, as well as an exclusive tune from Megadeth's Dave Mustaine, should have your inner shredder giddy with excitement.  A fair sized chunk of the set list is available, too, and it looks promising.  Do you think this Warriors of Rock news helps ease the painful memories of Guitar Hero in 2009?