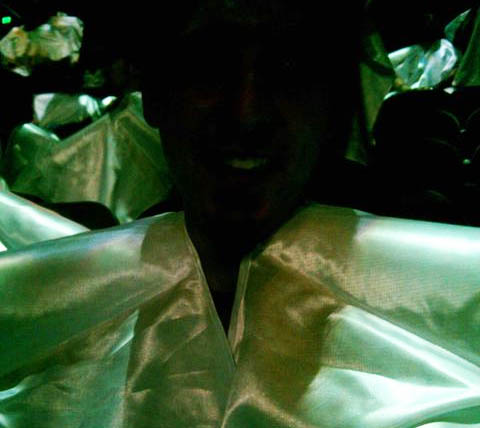 What you see above you is a picture of me with what was lovingly called "The Space Poncho."  These futuristic looking pieces of attire were given to every person upon entering Microsoft's Project Natal Experience, though none of us knew exactly for what purpose.  Having been described to us as an "interactive poncho," we feared the worst; especially, with it being a "technology free event."  Were we in store for some Natal like water sports?

Jason and I arrived quite early, before 6 o'clock, but the doors weren't going to open till 7.  So after standing in line for an hour, listening to the rhythmic and consistent pounding of a seen but not heard drummer, we were shuffled inside, handed our interactive ponchos, and proceeded to our seats.  In front of us was a gigantic rain forest like setting with basketball court length screens on all sides above us.  On these screens, familiar looking avatars conversed and joked with one another.  To our right - a family positioned on a couch, suspended in mid air some 50 feet above the crowd that was gathering below.

This event was, in part, produced by Cirque Du Soleil, the French-Canadian acrobatics and dance group famous for their amazing performances.  Throughout the first hour we were greeted by members of the troupe dressed as woodland folk that reminded most of us of creatures from Avatar.  These men and women played with the crowd by creating "fire," talking on tin cans and string, and just generally trying to make us laugh.

Soon the show started and it wasn't long before Natal became Kinect in glorious fashion.  It was quite the spectacle to unveil a name for sure, but so was the event on a whole.  Throughout the whole show a giant box on the wall displayed a family playing the games of Kinect; and not just playing - this family actually defied gravity as the box rotated.

The games themselves all looked very social, and, dare I say, co-op.  The highlight for most in attendance was the Star Wars game, where players became a Jedi - complete with force powers and light saber battles.  Other games on display included a Wii Sports clone, Joyride (racing game), Kinectimals (interactive tigers), a dance game and a yoga game.

The highlight of the night came during the finale when our space ponchos suddenly came to life.  The giant shoulder pads lit up with colors from green, to blue and purple.  Patterns lit up throughout the crowd as some mysterious magic made us all into part of the show.  It truly was impressive.

There definitely seems to be a lot of support behind Kinectic with a few other titles I probably missed.  I think though, overall, it was a bit of a letdown.  Granted, Microsoft hasn't given us anything other than a name and some footage for Kinectic, so we'll reserve judgement. With the games demoed here, it was hard for me to not think of and make comparisons to the Wii, or even further back with the NES Track n' Field pad.  The outdoor track games had the "family" demoing the technology running in place exactly like I remember doing when I was younger (ok, so, maybe I was one of those kids that didn't so much run in place as slap the pads with my hands really, really fast).  The Star Wars game was kinda cool, but throughout the whole demo, the one thought I had was that it must be tough to do some of this without any kind of physical feedback.  With the Wii, having the Wiimote in your hand gives you something to grab a hold of when you need to launch a bowling ball down a lane, or pretend like you're driving a car.  Even if it isn't a good facsimile, it at least provides you with something that helps you create the illusion.  Watching the Kinect demo, without seeing the results on the screen, these people looked like they were all trying out to be mimes - and not very good ones, at that.  There's a lot of potential for co-op and other fun games, but it's definitely going to take some time for the tech to work out all the kinks and become accepted enough to work.

Additional photos of us are posted over at GamingNexus.