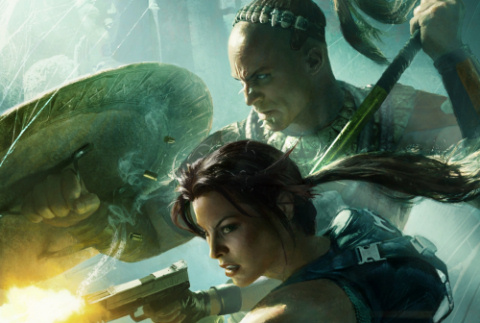 With E3 here, the summer has officially started in the world of gaming. With summer comes our lineup of Summer of Arcade games, Xbox's annual arcade highlights. First on the list this year is Lara Croft and the Guardian of Light, 2 player co-op included.

"Lara Croft and the Guardian of Lightfollows Lara as she goes in search of the Mirror of Smoke, an ancient artifact located in a ruin known as the Temple of Light. When she finally reaches the mirror, she is ambushed by a mercenary army who takes the mirror and release an evil entity. Also awakened by the incident, Totec, The Guardian of Light joins Lara as her unlikely ally to save the world from never-ending darkness."

Lara Croft stands apart from the Tomb Raider series not only in it's co-op capabilities, but also it's point of view, and general delivery. Last months impressions tell the tale of puzzles, Baldurs Gate Dark Alliance style controls, and Lara having to play nice with a nice South American warrior that is just there to help. We're looking forward to seeing the finished product, which should be available for XBLA, PSN, and PC at roughly the same time at the price tag of $15 (1200

We imagine the exact date of the Summer of Arcade games will be given as soon as the lineup is completely announced.