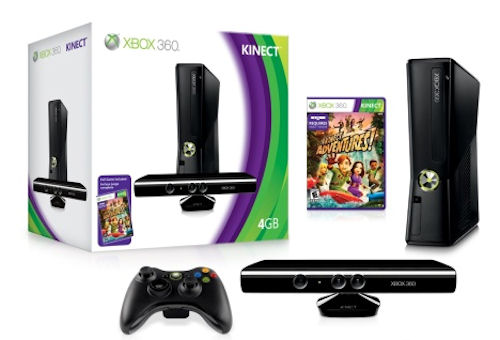 Ending weeks of correct speculation, Microsoft has announced that their upcoming motion "controller," Kinect, will be priced at $149.99.  This price was previously rumored on just about every retail site but the official comment from Microsoft was that the price wasn't decided on yet - making this announcement not that big of a surprise to anyone but Microsoft.  That being said we do have quite a bit of new information regarding the Kinect, including a free pack in game and new console hardware bundles to go along with it.

While the new Xbox 360 design has turned some heads with it's glossy black finish and offering built in Wi-Fi and 250GB of space, Microsoft is releasing a toned down version of the console with a matte black finish and 4GB of internal flash.  Releasing August 3rd, the console will cost $199 - effectively taking place of the Arcade unit.

This console will be bundled with Kinect for $299 when Kinect launches in November.  The effective savings would be $50 buying it with the bundle.

Microsoft has also announced that all first party games for Kinect will be $49.99 and ship in purple packaging (as opposed to the green) for easier awareness.  Third party titles can be priced differently, but Harmonix's Dance Central will be priced at $49.99 at launch.

According to IGN, Microsoft is already touting the multiplayer out of the box functionality of the device, comparing the initial price point of entry for two players to be lower than that of Sony's PlayStation Move.

"We're currently a full $100 less than the PS Move bundle which is $400, which is a single player experience. Obviously if you add a second player to that they get well over $500 pretty quickly."

EEDAR's Jesse Divnich has an interesting take on the pricing, comparing it to the mass quantities of "band peripherals" we've seen from games like Rock Band and Guitar Hero.  These bundled retailed for a similar price point.

Additionally, game specific peripherals have a limited shelf-life in terms of appeal; there are only so many sessions of Guitar Hero one can enjoy before game fatigue sets in. With the Kinect, however, there is the possibility of a wide array of games across a broad range of genres, potentially giving the Kinect a much longer shelf-life than a typical peripheral.

So for $150 is Microsoft getting your money to try out Kinect?