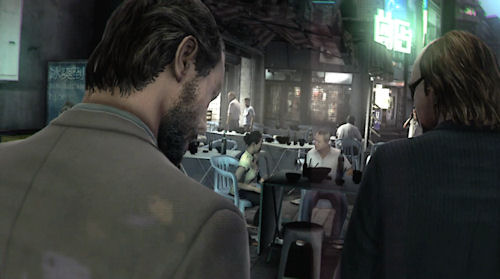 We've got a ton a Kane and Lynch 2 news today for you, so strap yourself in for one intense ride.  In fact, intense is proclamation for the game.  We've used it before and now the team at IO Interactive are using it in their latest developer diary describing their goals for the game.  Number one on the list?  You guessed it  - an intense experience.  The team also describes how they really focused on community feedback from the first game to improve things like the cover system, AI, co-op and more.

IO isn't the only one today describing the game as intense, as a brand new preview from Eurogamer has hit the next with a near final build of the game.  It's an incredibly glowing preview that truly sets the stage for what might be a surprise co-op hit this fall.  And while Eurogamer never actually uses the word intense, I think the following excerpt says it all.

...there's barely time to take a breath, never mind take it all in. Each section is a continuous, unrelenting chase sequence, with an improbable number of enemies standing between you and your target. Pursued by the shakiest shakycam ever, you dart down corridors and alleyways, kick down doors and sidle up to makeshift cover. Pausing only to return fire, there's a breathlessness to the action that's utterly exhausting.

If that doesn't sound intense, I don't know what does.  When we went hands on with the game, we couldn't help but agree.


In addition to the developer diary IO has release three short clips from the game.  The first two offer different perspectives on a certain situation in Kane and Lynch 2 - the last one is a clip from Fragile Alliance multiplayer in a subway.

Finally our news wraps up with the PC version of the game, which has been announced to integrate Steamworks.  The game will offer full Steam support for matchmaking, leaderboards and achievements as well as utilize Steam for its DRM.  We're seeing a growing number of titles utilizing Steam for their digital distribution service of choice and with good reason.  You can pre-order the game via Steam right now for 10% off the normal price, saving yourself $5.  I wouldn't call the savings "intense," but hey - you can't win em all.

Kane and Lynch 2: Dog Days releases for the Xbox 360, PlayStation 3 and PC on August 17th.