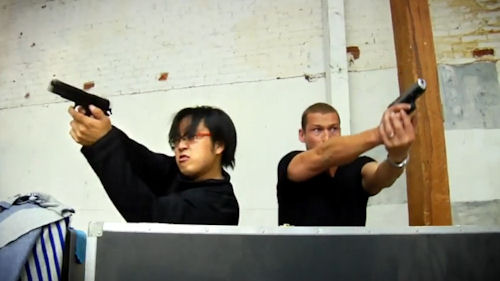 Light gun shooters may be one of the most memorable and unique forms of co-op games out there.  Everyone has their favorites whether it's Time Crisis, House of the Dead or Virtua Cop.  Time Crisis came out in 1995 and instantly became an arcade hit thanks to its unique cover mechanic.

If you don't know who internet video maker Freddie Wong is, do yourself a favor and look up his work.  He creates short action videos for YouTube that are of exceptional quality.  His latest is a homage to Time Crisis and it guest stars Andy Whitfield from the show Spartacus.  There's a lot of great nods here including the whole "you get the guys on the left, I'll get the guys on the right" and plenty of other inside jokes we've seen come from light gun shooters.

A new Time Crisis is set to hit this October called Time Crisis: Razing Storm - it offers full light gun and PlayStation Move support.  I'm thinking I want to play it with Spartacus.