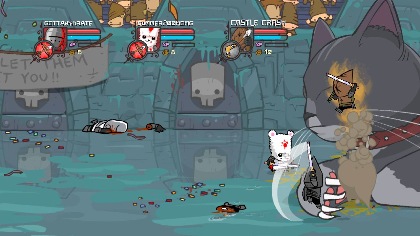 Well, I bet most of you know that Castle Crashers came out today. Like many of you, I booted up my 360 as soon as I woke up. However, I had to wait a while to play the game with my buddies. Sometimes, you just have to go to class (or work). However, once I was done with classes, I asked my buddy to join me for some Castle Crashers. Let me tell you, it was worth the wait.

There has been considerable hype and excitement around Castle Crashers, and for good reason. The game was made by the team behind Alien Hominid. And there's the whole four player co-op beat-em-up factor. Combine all of that, and you get a fun, funny, and surprisingly deep game.

I should preface my remarks by saying that my teammate and I have not beaten the game, and have only played a bit of the game. However, the basic concept of Castle Crashers can be seen in ten minutes or two hours. The combat is a nice combination of simple and complex, with a fun magic and ranged combat system. The leveling system is simple, but you can still upgrade four different features (strength, magic, defense, agility). Not bad for an arcade game. And of course, there are tons of unlockable weapons, characters, and animal orbs, all of which are rather unique and fun, or so I've experienced. So, what about the co-op? Not too bad, not too bad at all.

My roommate and I have only had the chance to play two player co-op, but that's all you need to get a feeling for the game. My roommate/teammate is not a big 360 fan, but he caught on to the game fairly easily.  However, my experience with 360 games (and Castle Crashers-like games) paid off too. So, you have the whole "novices and masters can enjoy" experience. My roommate and I enjoyed a lot of the fun things that come with co-op. Teamwork is required and fun, and camaraderie is essential. If one of your buddies gets killed, you have to give him CPR to resuscitate him, which we did (several times). We also made a quick resolution as to sharing our spoils in a fair manner, and built our characters in ways to compliment each other (he was a magical brawler, I was a well-rounded magic enthusiast).

Co-op wise we had a blast, and that was only after a half hour of play. What stuck us the most was actually not any of the game's great features. It wasn't the great character variety, and it wasn't the neat animal orbs. It wasn't even the cool boss battles, or the cool character design. What we enjoyed the most was the humor. The fact is the game is very funny. Apparently the Castle Crashers devs love poo-related humor, as in a forest level, we witnessed many forest creatures poo-ing themselves as something evil ran through the forest. Once we ran into the evil thing, the game got even funnier. As the evil goblin/cat/whatever chased us, we rolled with laughter as we tripped on logs and slammed into doorways, our "steeds" (really just small deer) slammed into the hazards with us.

So, in our limited experience, the game has been a great deal of fun. It has a great art style, and a great sense of humor. Oh, and it is an incredibly solid co-op game with an amazing amount of variety. Best of all? You get this for only 1200 Microsoft Points ($15). The money is well spent, and you and your buddies will have a lot of fun with this old school-style brawler with some nice RPG elements.