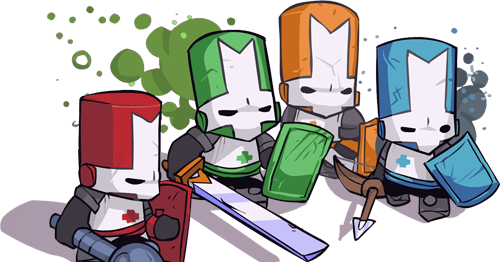 Co-op gamers everywhere really enjoyed Castle Crashers on the Xbox LIVE Arcade. Now, Behemoth games has completely rebuilt the Playstation Network version to fit the other half of gamers that missed out. We have been itching for new information on Castle Crashers PSN after being blown away at PAX East by the performance of the game, with little info since our hands-on time.

We still have no release date, but it sounds like it’s getting closer now that we have a price. Like the Xbox LIVE version of the game, Castle Crashers PSN will be released at $14.99, or $15.01, or whatever the closest denomination to $15 they’re allowed to do is. Still waiting on a date, but I’ve set aside my approximately $15 for this PSN title already.

In the meantime if you're headed out to the Penny Arcade Expo in Seattle, you'll get a chance to crash it up on a classic style arcade cabinet. The Bohemoth is going retro by building a co-op arcade cabinet for gamers to experience the new beat-em-up the way they were originally intended with the newly re-done PSN version of the game.