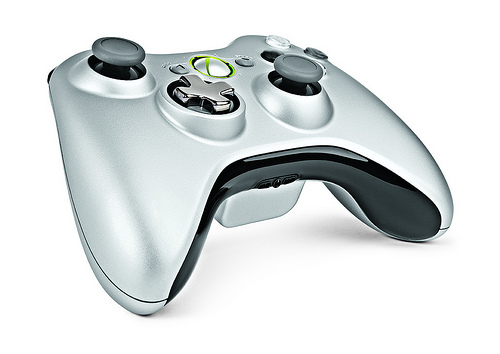 Imagine this scenario.  You and a buddy are playing some good old fashioned Streets of Rage 2 on Xbox Live Arcade.  You're making your way through the levels as Axel and Blaze punching skaters, bikers and bad guys in the face over and over.  But something isn't quite right, you're accidently grabbing your co-op partner one too many times, you're finding it hard to execute that dash move, and you can't quite put your finger on what's wrong.

"PUT MY FINGER ON IT!" you exclaim to your co-op pal.

"What are you talking about?" a puzzled partner looks at you.

"I know why were having problems kickin butt and totally "Ragin'" out!"

And at that moment you both look down at your shiny gray, black and silver Xbox 360 controllers.

"D-PAD...TRANSFORM," you say in unison as you give the d-pad a twist revealing a classic feeling d-pad perfect for those 8-bit romps and fighting games alike.

A new Xbox 360 controller is on the way from Microsoft, designed to give fans something they've been craving for ages - an improved d-pad.  The controller is out on November 9th and features gray and silver buttons, concave analog sticks and includes a Play N Charge Kit with rechargeable battery.  Your cost?  $64.99.

Mr X....your reign of terror is over.  We're coming and we're bringing our D-Pads with us!