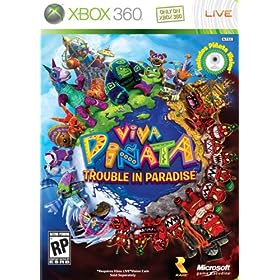 We've got a double co-op feature this week.  First up is Viva Pinata: Trouble in Paradise for the Xbox 360.  The title features a recently announced 4 player co-op mode for both online and offline play.  The game is similar to the Animal Crossing series from Nintendo, but has some zany humor and plenty of gardening goodness with pinatas to pop and populate.

Next up is Mercenaries 2: World in Flames which is available on the Xbox 360, PlayStation 3, PlayStation 2 and PC.  The game features 2 player co-op for online play including drop in and drop out support.  The game is an open world playground of destruction where you'll complete missions in a war zone as a mercenary.  I've been playing a good bit of this and it's a total blast, the co-op has a solid Crackdown vibe to it.