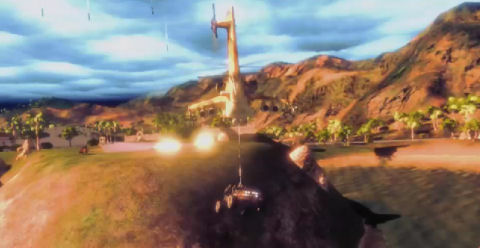 It's no secret that we really like Mercenaries 2: World in Flames.  We've been playing the co-op mode, enjoying blowing things up like it's going out of style.  Dropping a bunker buster on a building (or a teammate) never gets old.  And despite the fact that there's still tons of game to play, the folks at Pandemic have put together a "stunts" video that shows off some other things you can attempt in the game.  A lot of the really cool stunts they show off require co-op play to complete (like above) - and I gotta say, I'm pretty pumped now after watching the video.

Want to act like a daredevil?  Hit the jump for some ideas.