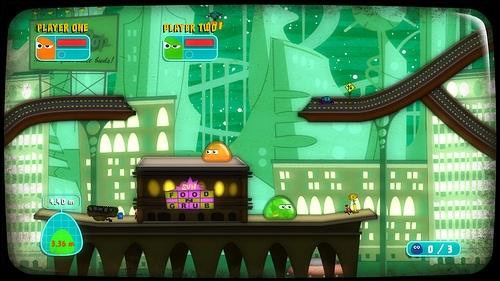 Toronto based developer DrinkBox Studios is working on a new side scrolling platformer: Tales from Space: About A Blob. The game is being developed for download on the PSN.

Tales from Space: About a Blob is a game about an innocent little creature that grows and grows until it eats the whole world. In development since January of 2009, the game features a monster movie setting and theme, a retro-inspired art style and puzzle-focused platforming gameplay.

DrinkBox Studios recently showed an early demo at PAX.  The game will support two player local co-op.  The trailer looks to have a fun 'Splosion Man vibe with a Katamari Damacy-like growth meter in the lower left-hand corner.

As their first original game, DrinkBox Studios is most definately bringing it.  The game boasts an evil scientist and an ability to eat dog food!  Dog food!  Sign me up!  The environments seem to range in size from small pipes to cityscapes.  The developer blog does mention something about eating the whole world, but they had me at dog food.

Little zany games like this have proven to be real gems. We'll see how this one turns out when it releases for the PSN later this year.  Check out the trailer and let us know what you think.