Tales from Space: About a Blob is the story of a gooey alien creature who grows by absorbing stuff.  All manner of items, from screws to fruit to soccer balls and even tanks and buildings, can be assimilated, causing the blob to grow ever larger.  As you play, the blob gets filled with a crazy assortment of things, and that's really a pretty good description of the game itself.  It uses many different ideas, and manages to combine them together fairly well, but there's something slightly messy about it at the same time.

The first thing you notice when playing About a Blob is the graphical style.  It's a bright and colorful game, and it really pops in high definition.  From the blob's animation to the backgrounds and everywhere between, presentation is top notch.  There is a definite 50s monster movie vibe to the experience that I really enjoyed.  The storyline itself is structured very much like a movie, adding to the cinematic feel.  As the tale begins, the tiny blob is being studied in a lab, but eventually it grows large enough to threaten the world, a la Godzilla. 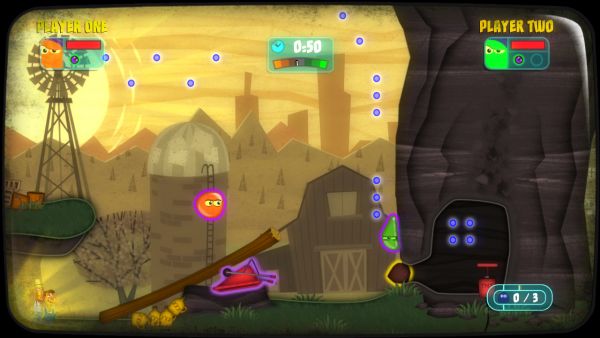 The ever-growing nature of the blob carries over into gameplay.  Objects that are smaller than the blob can be absorbed, adding to its mass.  At critical thresholds, the blob can absorb larger things, like corks that lead to different sections of the level, and this is how the game progresses.  As you play, you can see the little bits of stuff floating around in the blob's translucent body, which is a neat touch.  The blob can spit out these bits to attack, press buttons, or otherwise interact with the environment.  All told, it's a pretty good system, and leads to some interesting puzzles where you have to backtrack to earlier areas, making About a Blob not feel as linear as other platformers.

While the absorb and grow mechanic was enjoyable on its own, the developers saw fit to bestow the blob with additional powers in later levels.  Magnetism allows the blob to repel or attract metal surfaces, and electricity can power up items like platforms.  Once these powers are gained, the puzzle and platform elements shift drastically.  These sections do add to the variety in the game, but I felt as if I had barely mastered the absorbing mechanic before it was de-emphasized in favor of the new powers.  I'd have preferred variety delivered through the puzzles and platforming elements themselves rather than by odd, tacked on abilities.

Another issue I had with the game was the controls.  The blob moves and behaves with realistic physics, and, just as you'd expect, it wiggles and jiggles around a bit haphazardly.  This makes executing precise actions like repeated wall jumps, running jumps, and the like frustrating from time to time.  Though the game would seem easy to pick up and play, the controls suffer from "too many buttons"-itis.  At times, you'll need to hold down a face button, press two rockers, and move both sticks simultaneously in order to get things done; this, like the additional powers, seem needlessly complex, and hand-cramping, too.