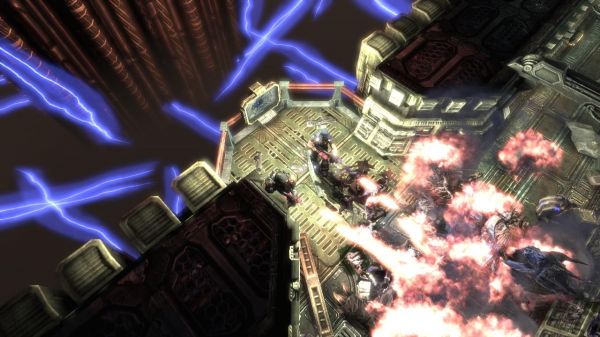 The first Alien Breed title, called Alien Breed Evolution on XBLA, was a solid top down shooter that was tweaked quite a bit for its PSN and PC release where it was called Alien Breed Impact.  Today Team 17 has announced the next chapter in the series in a game called Alien Breed 2: Assault.  The original game was conceived as an episodic series and it looks like Team 17 is making good on that promise.

Assault continues the story of Conrad, stuck on a fatally damaged ship under attack by an alien menace.  Like it's predecessor, the game will have an offline and online co-op mode for two players through co-op specific versions of the single player game's levels.  New though is a survival mode where players are tasked with fending off the never ending alien swarm...not to be confused with Alien Swarm.

·          NEW - “Survivor” mode: Resist endless waves of intense alien horde attacks in specifically designed arena environments, or team up with a friend in order to reach the highest score in two-player co-operative assaults!

·          NEW – More equipment to combat the horde including Hardened Armour and new weaponry:

·          NEW – Alien Foes – Enter into conflict with the all-new ‘Webber’ alien and endure dramatic encounters with new and shocking bosses.

·          Epic Single-Player story mode - The single-player campaign mode that follows the continuing narrative of the game through five huge and challenging environments.

·          Exclusive Xbox™ LIVE Avatar award items – ‘Barnes’ Helmet and Body Armour (male and female versions) awarded to the player by killing a set number of aliens (the helmet) and by completing the single-player story mode (the body armour).

Surprisingly the game is launching this Wednesday, September 22nd on both Xbox Live Arcade and Steam.  There's no word on a PSN version.  Price is $10.