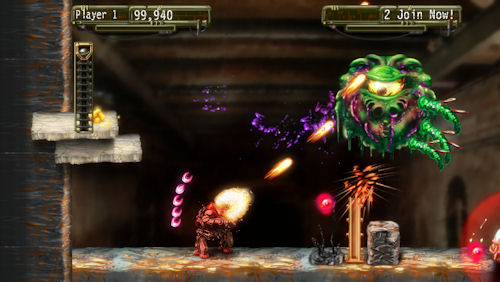 I'm pretty sure the title of this game says it all, but when you call your game Explosionade you know you're going to have something worth checking out.  The game is the latest creation from Mommy's Best Games, best known for their co-op SHMUP Shoot 1UP which we previewed at PAX East earlier this year.

Explosionade is a two player couch co-op shooter that looks similar in style to Contra games but will feature plenty of over the top explosions!  The story is simple - everyone gets to have all the fun by storming the Horronym Fortress but you were left to guard the supply depot.  Disregarding orders you open the depot to find a gigantic, prototype mech!   And where there's a mech...there's a way...to blow crap up!

The co-op options features a unique mechanic in which a dead player can revive himself back in by stealing the life of his co-op partner.  This makes co-op play and team work a necessity!

* INFILTRATE subterranean strongholds manned by cunning bipedal aliens and their mind-blasting hellions!
* Recharging MegaNades, and an earth-shaking machine gun rip DESTRUCTIBLE environments to hand-drawn bits!
* Dozens of CHALLENGE-ROOM style gameplay with a zoom function that let's in you close or zooms out to see all the action!
* 2-PLAYER COOP so you can share the alien-stomping, grenade tossing joy!
* ONLINE High Scores to show off your skills!
* Hand-drawn, silky-smooth effect animations just like Mom used to make! (If your mom was SNK)

Explosionade should be out the week of September 25th on the Xbox Live Indie Games channel.  You can read more about it, including more screens, on the official Blog.