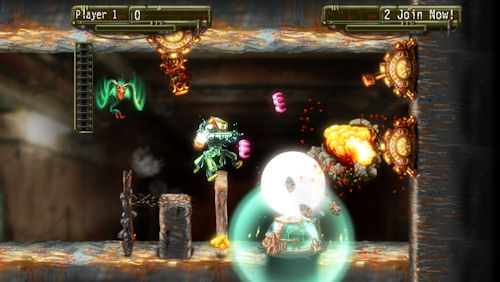 While Mommy's Best Games was hoping to launch their two player co-op game Explosionade this week, it appears a few delays in the Xbox Live Indie Games approval process have pushed it to next week.  Not to worry, we're here to quench that thirst with a brand new trailer of the game in action.

Similar in style two MBG's other titles like Shoot 1UP and Weapon of Choice, the game features bright and colorful graphics with a gritty edge to them.  In motion it looks gorgeous - sprite based games aren't something we see too often now a days, so it's a pleasant visual treat.  Plus stuff blows up.

According to Nathan Fouts, the games designer and programmer, they are using the extra time to put "more and more coop stick to your bud little things in the game."   Sounds good to us.  If all goes according to plan the game will launch on October 5th for $1.