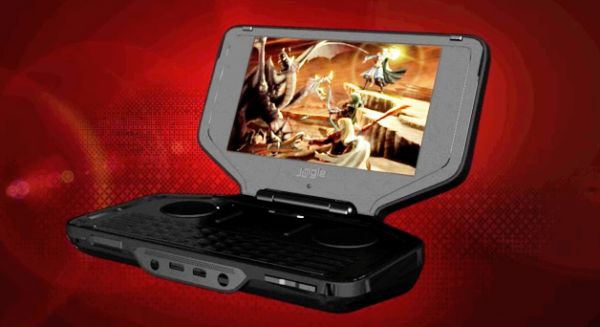 It's not often we get to bring you new video game system announcements.  It's even less often that such announcments aren't related to the big three of Sony, Microsoft, and Nintendo.  This rare occasion is the news of a new player in the handheld system arena from Panasonic (their first since the 3DO).  Dubbed the Jungle, the device will focus on online multiplayer, namely MMOs.  That sounds very co-op friendly, doesn't it?  World of Warcraft in your pocket?  Well, not yet; the Jungle is rumored to run on Linux.  What we do know about the device is sparse at this point: a slick HD capable screen, a full QWERTY keyboard plus standard gaming buttons, wi-fi, and a nifty-keen clamshell design.

No details about price are available, and there is no release date, either.  As of now, the only accounced game for the Jungle is Battlestar Galactica Online.  Will the Jungle be able to compete with the iPhone, DS, and PSP in any way?  It's too early to say either way, but the possibilities of the device are certainly intriguing.