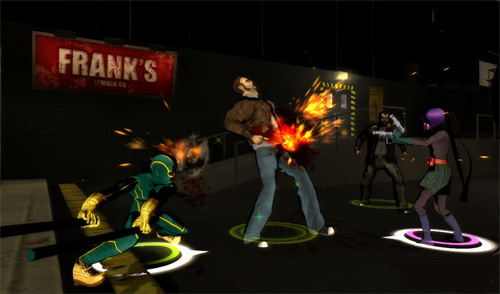 This is Kat "Shadokat" Pawlowski reporting in for Marc "Djinniman" Allie, who is facing an unforeseen crisis at the moment. He has fallen pray to the realm of single player like so many around him, playing the Iron Man 2 game (which should have had co-op because Warmachine, duh) instead of co-op. I'm here to share the importance of co-op gaming caused by this single-player crisis.

As many college students know, last week was the approximate date for finals for the majority of people. This left yours truly a bit preoccupied with studying, rather than gaming. Well, a buddy was visiting from out of town at the time, and he was left to his own entertainment devices - i.e. video games. The games he chose, I noticed were primarily co-op games that he was forced to play alone.

First up was the attempt at playing Kick-Ass. He's seen the movie, he read the comics, and he needed to play the game. Unfortunately, Kick-Ass doesn't scale difficulty for the single players in the crowd, and the result was somewhat volatile. No controllers were thrown, but a temper was certainly rising before giving up the role of a lone Big Daddy. Remember kids, superheroes have sidekicks because it's more fun.

Later in the week it was time to study for Astronomy studying, and space on the brain brought us to Aces of the Galaxy. I hyped up the game as one of my favorite co-op arcade games, so he took my advice. Unfortunately, the co-op part was much more important than the game itself. Four out of 12 levels into the game, more temper, frustration, and mild cursing ensued. Friends don't let friends fly solo. Oh, and Aces is still one of my favorite Co-Op arcade games.

We did eventually get our co-op on, plowing through Kick-Ass over the weekend. To our pleasant surprise, the game was awesome and the co-op company wasn't bad, either. We worked on our strategies, kept tempers in check, and enjoyed the epic storyline of Kick-Ass in interactive form.

Co-op games really are meant to be played with a buddy. Either as a guide, or a friend on the battlefield, you really can't go wrong with co-op. Well, unless you play with jerks - but that's what we're here for! Jerk-free zone for co-op buddies. Find buddies that match your style, and hopefully aren't studying for finals when you're around to visit.

This brings us to our conclusion of this special last-minute This Week In Co-op broadcast. We now return you to your regularly scheduled gaming.