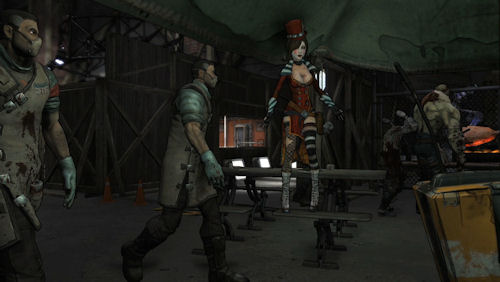 Gearbox have just released a special launch trailer for Borderlands: Game of the Year Edition showcasing the comedic writing that's prevalent throughout the series.  The four minute long trailer brings back your favorite characters from the game and DLC with some shocking revelations.

Who knew Zed and Ned were actually played by twins?!?!  Who knew Claptrap had a toilet?  Who knew Moxxi outsold The Zombie Island of Dr. Ned?!?!  The twins excuse for why it did was quite priceless - and probably true.

Just about everyone makes an appearance in the trailer so be sure to give it a watch.  And if you plan on picking up the Borderlands GOTY edition you can snag the 360 or PS3 version from those links and support Co-Optimus!

Don't forget - for those of you who already own the game, tonight we're kicking off a co-op night on Xbox Live complete with prizes to give away! Sadly - it appears the patch isn't going to be live in time, a post on the Gearbox forums stated it was in the "final stages of QA" on October 12th - so it's yet to even make it to certification.