As promised in our last column, we'll take a look at Sega's Altered Beast this week.  First gaining fame as an arcade hit, Altered Beast eventually got released for the Sega's classic Genesis system.  Back before Sonic (it's hard to remember back that far, isn't it?), Altered Beast was the pack-in game for the Genesis.  You'd better hope you sprang for the extra controller, because Altered Beast was a co-op fan's dream.

Back in the day, I was a hardcore Nintendo fan, and I guess I still am to some extent.  But I still vividly seeing the Sega Genesis in action for the first time.  It totally blew the NES out of the water, and Sega promoted that fact vigorously.  The Genesis had a more adult feel to it, at the start of it's release.  A very cool aunt of mine took my brother and I to Toys R Us one Saturday, and on the spur of the moment, she bought a Genesis, an extra controller, and Lakers Vs. Celtics.  We spent an awesome evening playing, and while the basketball game was decent, the real fun came from playing Altered Beast.  It was just head and shoulders over anything else that was available at the time, and would be until the Super Nintendo was released a year or two later. 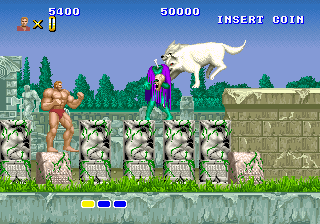 The graphics on Altered Beast were stunning.  Huge, well detailed characters looked quite impressive.  The backgrounds were well detailed, too.  The entire art direction for the game was jawdropping , especially if you were into fantasy and mythology, which as a card carrying nerd, I certainly was.  The enemies were downright creepy.  Zombies rising from the grave, and carrying their own heads.  Two headed wolves that leaped all over the screen.  Even demons and imp-like creatures were featured.  (An easter egg of sorts: the bird lizard mount from Golden Axe makes an appearance.)  Of particular interest was the fact that these enemies turned into bloody chunks when defeated.  Like I said, the Genesis seemed like a grownup's game system, and Altered Beast was a good example of that. 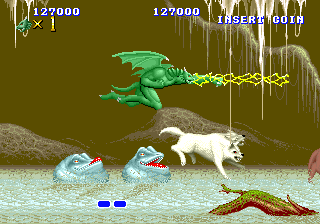 And the speech!  A home video game actually talking to you was quite novel.  I'm not sure if the NES had voice or not, but even if it did, I doubt it was as "totally radical" as the clips in Altered Beast.  Though they seemed to be the bee's knees at the time, they are hilarious to listen to today, in this day of full voice acting and cinema style cut scenes.  "Rise from your grave!" Zeus commanded, as the game began, and yet he sounds a bit like Elmer Fudd. When you caught an energy orb, the haunting tones of "Power... Up!" echoed, and at the end of each stage, the big bad guy taunted, "Welcome.. to your doom!"  I wonder if they actually hired an actor, or just had the programmer's roommate do the voices.  Still though, the cheesy voices just added to the charm. 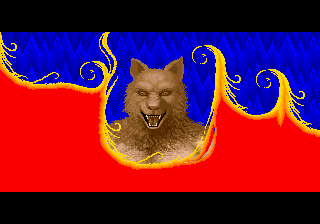 The highlight of the game, I have saved for last, and that is the power up system.  When you killed a blue wolf and touched the floating orb he dropped, you buffed your character.  We're not talking just more damage here, but your dude actually got more buff.  At the beginning of the level, you were a regular looking guy, but after one orb, you were more like Ahnold himself.  A second orb, and you looked more like the Michelin Man; even your muscles had muscles.  But grab a third orb, and watch up bad guys, it's time to howl!  A sweet animation showed your fellow turning into a crazy beast-man!  The wolf form shot projectiles across the screen, and had a nice battering ram style attack as well.  The bear was a bit disappointing, rolling into a ball and bouncing around, mostly.  Coolest of all was the dragon form, were you could fly around the screen, and shoot lightning from all over your hide!  You could even shoot bolts of lightning from your snout.  Why the dragon was featured on the second level,and never seen again, I have no idea. 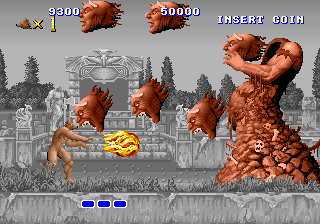 When playing two player, it was a mad dash to get those orbs.  You didn't want to be stuck in 98 pound weakling mode when your partner was zipping around the screen, shooting stuff like crazy while you could barely kick foes right in front of you.  Once you were both transformed though, that's when the good times really began.  The feeling of invincibility was almost intoxicating.  High fives and much hooping and hollering were quite common, let me assure you.

Altered Beast was certainly one of the more memorable co-op titles for the Genesis.  I must admit, my knowledge of Sega's most successful system is limited, as I never owned one myself. Broodax reminisced about Toe Jam and Earl, and Bapenguin has spoken highly of the Streets of Rage series, all of which were highlights of the Genesis library.  I'm always on the lookout for more titles for Classic Co-Op, and if you know of any title, Genesis or otherwise, that you think is worthy, let me know.  I'll do my best to check it out.  In the meantime, remember to immediately kick any two headed blue dogs you might run into, and don't go hanging around ancient Greek cemeteries.