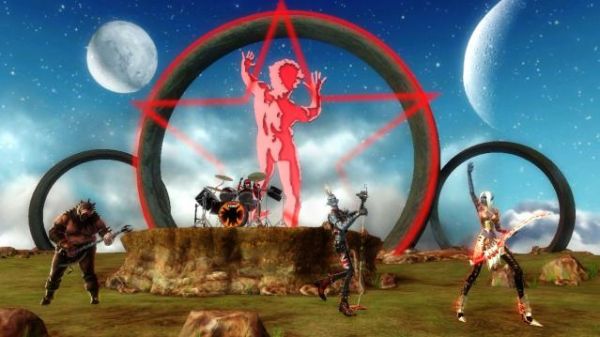 If you've been following the yearly to bi-yearly releases of music games, you know the genre is becoming increasingly competitive.  But could the over saturation of music titles be signaling a change in consumers wants?  Cowen and Company analyst Doug Creutz has put Guitar Hero: Warriors of Rock sales numbers at 89,000 units for the first 5 days following launch.  It may not sound that bad, but lets look at some perspective.

Last years Guitar Hero 5 sold half a million copies in its first month, while Guitar Hero 3 managed 1.4 million units in its first 5 days.  Last fall there was a ton of competition with no less than 5 music games on store shelves - this fall we're looking at more with Rock Band 3, Rock of the Dead, Def Jam Rapstar, and DJ Hero 2 as well as the aforementioned Guitar Hero.  There's other smaller titles as well like PowerGig: Rise of the Six String and Jam Party: Be the Music - both of which won't be poised to sell tons, but still fills the market up making it quite a full roster of music titles to play.

A lot of hope is riding on Harmonix and Rock Band 3 - a game that a lot hope "re-engergize" the genre.  Many wonder if the lure of actually learning how to play instruments is enough to spur sales.  The actual customer base for such a feature could potentially be small.

A lot of folks are perfectly content with their existing versions of the games and simply extending the experience by purchasing DLC.  After 2000 songs there's plenty to play in Rock Band 2 and the Guitar Hero franchise has done an equally solid job releasing consistent content updates almost every week.

Perhaps the publisher driven nature of this annual titles will finally come to an end this year because of poor sales.  Efforts can be focused on new styles of co-op music games.   Rock Band 3 is out next week, so it won't be long before we know our answer as to whether or not there truly is a decline.