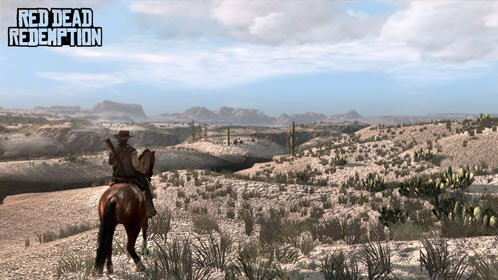 A lonely cowboy is a dead cowboy.

Ah, my first This Week In Co-op, or as we like to call it around here, TWIC.  Maybe that’s just what I call it.  As a news editor, I find it important to relay the facts exactly as they went down.  For this session, Jim, the Texas Hurricane himself, posse’d up with me for a little Red Dead Redemption.

‘How many people does it take to make a posse,’ you ask?  Well, we have Texas, a Hurricane, and a Cubninja, (which is the highest form of ninja), so...two.  Together we made a Texas Hurricane Cubninja posse, which is the most badass posse imaginable.  Now here is how things went down.

First of all, imagine my disappointment, as I am expecting ‘Texas Hurricane’ to be meeting up with me on Xbox Live.  Unfortunately, Jim goes by the Gamertag Van Lingo, which is catchy, but no Texas Hurricane.  Then I see that he has taken the Red Dead title ‘Gringo.’  That’s right, he’s Gringo Van Lingo.  And I don’t care who you are, that name is frickin’ BOSS.

If you mess with the bull, you get bull penis in your screen shot.

So I ride up on my Bull, cause I’m cool like that.  I roll with a coal covered miner whom I’ve dubbed ‘The Ugly.’ So I’m ‘The Ugly Cubninja,’ which if you know me, you’d appreciate the irony, because I’m so damn good looking.  Jim’s sporting a clean-cut cowboy and a horse that looks like a Cleveland Bay.  Now, as a native Ohioan, I can tell you nothing good ever came out of Cleveland, so I know his horse is going to be a little on the slow side.  Just like the ladies from Cleveland, am I right?  But seriously, chicks from Ohio hate me.  But all that’s okay, because I’ve got mounts to spare.

Took this picture to show off my gold rifle.  But all I see are giant bull testicles.
Do we really need our mounts that anatomilcally correct?

After the obligatory ‘So what are we gonna do,’  that comes when two hombres meet up in an open world game, we decided to do some hunting.  We head to Broken Tree, where I, the more experienced player, took the opportunity to show Jim how a wild boar can gore the bejeezus out of you if you’re not careful.  After taking out the boar ring leader, Wilbur, we put our heads together to figure out what to do next.

And that’s when I saw him.  Another player approaching, sneaking through the bushes.  There’s only one reason to sneak up on someone in Red Dead, and that’s if you’re a no good dirty griefer.  Before I could warn him, Jim took a deadly round to the back.  I quickly rode toward our assailant, who gunned me down before I could remember that I wasn’t playing Halo.  Whoops.

After a quick respawn, I’m back in the action and remembering to pull the left trigger before I shoot.  Now, one thing about Red Dead Redemption Free Roam is that you can be going about your business, then someone takes a shot at you, and all the sudden you’re William Munny at the end of Unforgiven.  “Any sumbitch that takes a shot at me, not only and I gonna kill him, I’m gonna kill his wife, and all his friends, and burn his damn house down.”

Unfortunately for the guy that shot us, he was on his own, and not that great of a shot under pressure.  Now I don’t condone what we did, but turning the griefer into the griefee is sweet, sweet justice . Sweet Red Dead Texas Hurricane Gringo Van Lingo Ugly Cubninja Justice. So we made him rage quit and he got the F out.

At this point Jim and I are about ten to fifteen minutes into the game . I haven’t even got to the Outlaws to the End co-op missions, the horse racing, or shooting up Armadillo.  One thing I’ve got to hand to Jim, he was using Expert targeting.  I hated admitting to him I was using Normal targeting, but I like hitting what I’m aiming at.  People from Texas just do things bigger, I guess.