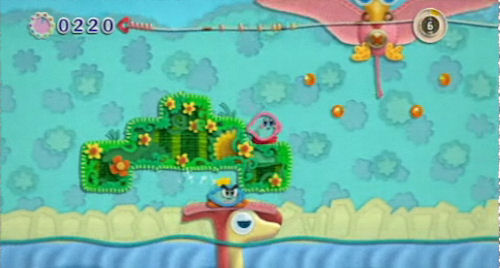 Face it, when you saw images of Kirby's Epic Yarn you thought it was a pretty cool concept. A world built around and taking place on yarn figures, fitting perfectly with the performance capabilities of the Wii? Yes, please! In fact, we gave Kirby's Epic Yarn a perfect general score, with a bit of room to improve in the co-op.

Hal Games' manager Takashi Ikegami seemed to really like the idea, too. When he was first working on the sound for the game, two thoughts ran through his head. First was that the concept worked really well, and could work for other characters known for Nintendo fame (Such as Mario, Link, Samus, etc.). Second, he really wished he'd thought of the concept himself.

When I first saw them, I thought they were perfect for Kirby. I think there's a lot of potential for expanding this style to other series, like making a game called Mario's Epic Yarn. That's how well I thought the foundation had been laid, so I was really happy that from among all the characters available it was Kirby who was chosen.

The gameplay itself worked really well, the sound was great, and the quality was definitely there for Kirby's Epic Yarn. With that being said, does this style of retro gameplay accompanied by miles of yarn work for other Nintendo heroes? We'd certainly not be opposed to trying some out, hopefully with a bit of beefed up co-op. Maybe Mario AND Kirby's Epic Yarn?