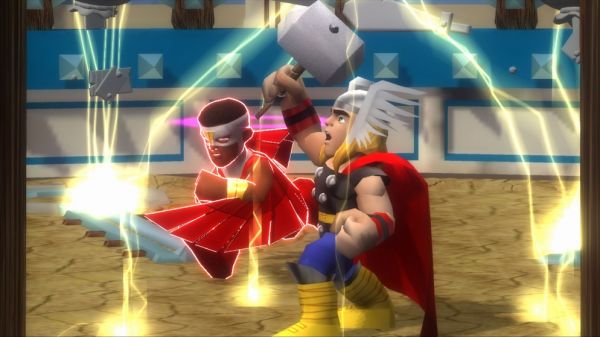 Who needs Call of Duty: Black Ops when you can get adorable action figure-like versions of Marvel Superheroes in video game form instead?  I suppose the answer to that question is "most people".  Still, Black Ops is a grown up's game, and folks like Thor and Iron Man are far more appropriate for the E10+ crowd.  Last year, the first game based on the hit Cartoon Network show was released, and we weren't exactly fond of it.  The new game, subtitled The Infinity Gauntlet, is available today for the Wii and this time, for Xbox 360 and PS3 as well.  Perhaps the camera and co-op, increased to four players, are a bit more thoughtful this time around.  And a high-def makeover can't hurt, either.

Support Co-Optimus by using the above links to purchase Marvel Superheroes The Infinity Squad!  Your inner super-cute super-hero will love you for it.