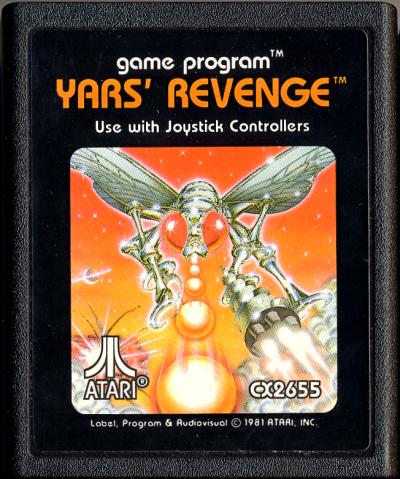 I have fond memories of gazing at  the cartridge art for Yar's Revenge.  It was, nay, is the best game art I have ever seen.  A robotic insect is flying straight at you, spewing forth some type of nuclear-fueled energy globules, four-barrel death blaster in hand.  The artwork deftly explains the subtile intricacies of the esoteric title.  By gazing upon this image you know that this is Yar and this is its revenge.  Yar's visage compels you, commands you, to put this cartridge into your Atari 2600 and lay waste to all that has wronged it.   If this image is not on the side of a van somewhere in midwest, surely we have failed as a society.

In yet another assault on my childhood, Atari has announced a remake of Yar's Revenge.  Killspace Entertainment, made up of former members of Pandemic and Obsidian employees, is tasked with developing the title.  That's an impressive pedigree for a new studio.  The actual game may not have been as good as I remember, but let's compare an image from the original with a still from the new trailer. This is actually exactly how I remember it.

Impressive, I know.  Yar may not look as cool as the box art, but you can still see fury in they pixilated antenna.   Yar is on the left of the screen, blasting away. The multi-colored null field negates Yar's blasts as well as the Yar-seeking missiles launched by the shielded cannon, so you're safe in there.  You can blast away at the brown shield until a path is made to the cannon, which is impervious to Yar's own blasts.  By touching the cannon, you can summon a tactical, Yar-guided revenge missile that will appear on the  left.  Then you can launch it, destroying the cannon.  There were other modes that changed things up a little bit, but  that's the nuts and bolts of it.  You can still play the original in Microsoft's Game Room.  So, what's the update look like?

Deep breaths...Maybe is looks different in motion.  Come on, Yar, you're a giant badass fly!  Don't let me down!

Great.  Another androgynous anime commando space marine in power armor.  Details are still scarce. Yar's Revenge is expected early next year for download on Xbox Live Arcade, the PlayStation Network, and PC.  It will support local co-op, and probably make me die a little inside.