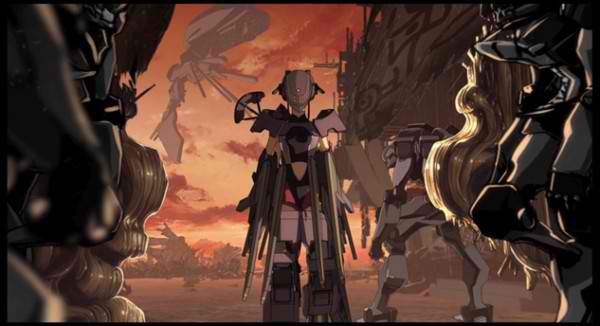 A few months ago we brought you news that Atari is remaking the Atari 2600 classic, Yar's Revenge.  The staff member (hint: it was me) who posted the article was a little distraught over the new look of "Yar."  The main protagonist of the game is no longer a bad-a$$ metallic fly, but is now a half-armored anime girl.  Remember the slow death currently happening to the Japanese game industry?  Can we please stop emulating them? I've seen a lot of half-dressed anime babes in gaming, I cannot say the same for giant metal death flies.

On the bright side, the game looks reminiscent of the Panzer Dragoon games, which were from an age when Japan owned the video game market.  Plus, it will support local co-op. The new video has a good portion of concept art and game footage.  Yar's Revenge is scheduled for a Q1 release this year for the Xbox LIVE Arcade, Playstation Network, and PC.  Let us know what you think.  Do you like the look of the new Yar?  Does hearing the name Yar make you think of a pirate, too?