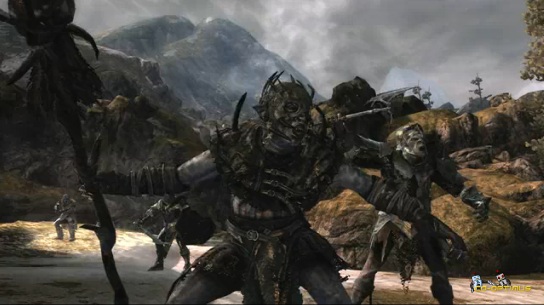 We've been excited about The Lord of the Rings: War in the North for a while now.  The good people over at Snowblind have been pumping out trailers for the past year.  The latest trailer features actual gameplay footage.  The game looks like it has more of a third-person action feel than the studio's previous isometric games like Champions of Norrath and Baldur's Gate: Dark Alliance.  This game will also be rated 'Mature,' a first for the series.

LOTR: War in the North will feature 2 player local co-op and 3 player online co-op.  The game seems to have the Holy Grail of co-op gaming, split screen combined with a third player online.  After you pick one of the three races; Dwarf, Elf, or Man, you "will experience extensive character customization and development, expansive co-op gameplay options and upgradeable weapons, skills and special abilities."  Expect to get your fellowship on in early 2011.