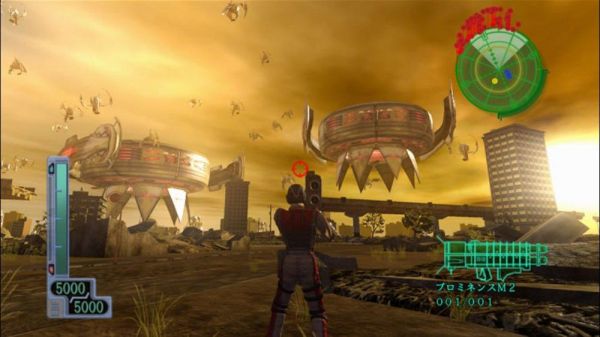 Cult classic Earth Defense Force 2017 is now available from Games on Demand on Xbox LIVE.  The third-person shooter will cost you $19.99, plus tax.  For those of you who don't know, EDF 2017 is an action-packed masterpiece composed of fantastic sci-fi elements.  Giant bugs, giant robots, giant monsters, and a giant selection of guns are all featured.  The whole thing is campy fun.  The visuals look cheap, but not in a bad way.  Think Godzilla-style destructible buildings, where the smallest explosion sends them crashing to the ground.

The Games on Demand website lists the game as having 2 player online co-op, but I think that is a mistake.  My source tells me that the game supports only 2 player local co-op.  What source you ask?  Read on to find out. Booyah!  I've got my copy right here!  And if this dusty scan tells us anything, it's that I really need to catch up on my house keeping.  But if we look a little closer, we can see some details on the actual retail box art of EDF 2017. We can 'clearly' see that not only is the game two player local co-op, it specifically says it does not support Xbox LIVE.  So buyer beware.   Unless they patched EDF 2017 to have online co-op (which would be awesome), you are actually looking at a couch co-op game.  But none of that matters.  Buy it.  Buy it and play it and try to beat the hardest difficulty level.  Maybe after that you will be ready for Earth Defense Force: Insect Armageddon, when it releases next spring.  That game will have local and online co-op.

Oh, and you see where it says '4 destructive vehicles'?  Don't bother.  As I've said before, like the knife in Resident Evil games, or the girl that works at Gamestop, they're just there to mock you.