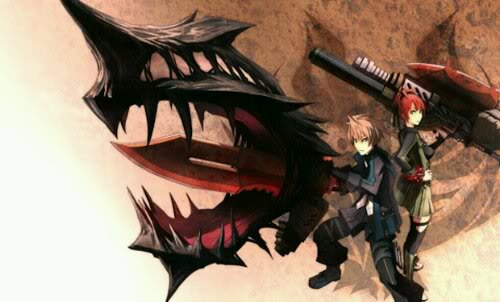 God Eater Burst hasn't exactly been the game on North American co-op gamers minds. After taking a look at some very Monster Hunter-esque gameplay, complete with 4 player local co-op or Ad-hoc online co-op - perhaps it should be. We took a look at a solid hands-off preview of the game, as well as the trailer. You be the judge.

I did say that God Eater Burst is a Monster Hunter-esque title, but that doesn't necessarily make it a rip-off of the already successful franchise. God Eater Burst works as a series of over 100 mission-based levels with an in depth story.

As for the story of God Eater Burst, you play as young warrior that is on a mission to destroy powerful creature known as Aragami. Of course, you’re not alone on your mission and you’ll have to team up with other warriors in order to defeat this mighty creature. All warriors that are fighting against Aragami are given the name God Eater, therefore you must unite with other God Eaters in order to destroy this evil creature once and for all.

Before you really delve into the storyline, you'll get quite a few more customizing options for your characters than I've seen in a portable game. No word on being able to take your character with you in the co-op, but we look forward to that information as it becomes available. It's nice to see more portable games going the route of co-op, and I for one can't wait to try out some God Eater Burst action with some buddies. We can expect to play God Eater Burst starting in March, 2011.