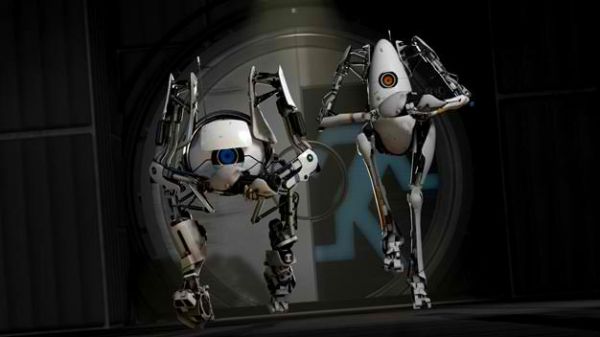 Portal 2 will be hitting retail store shelves this spring.  On April 21, 2011, you and a friend can get together for some couch or online co-op action with the two bots from Aperture Science.  EA will be publishing the retail version while the Steam edition is due out the same day.  In a press release EA states:

Portal 2 is Valve's most innovative title in the company's history and will be launched with a first-class launch campaign this April.

I don't know if "first-class launch campaign" means commercials featuring an exploding GLaDOS-style space cruiser reflected in a fallen Spartan's visor as Kobe Bryant and Jimmy Kimmel fire portal guns at each other, all while the Rolling Stones' "Gimmie Shelter" plays in the background,  but I can dream.  I just got chills. Portal 2 will be available on Xbox 360, PlayStation 3, PC, and MAC.  Of course, this is a Valve game, so the whole thing could be delayed at any time.