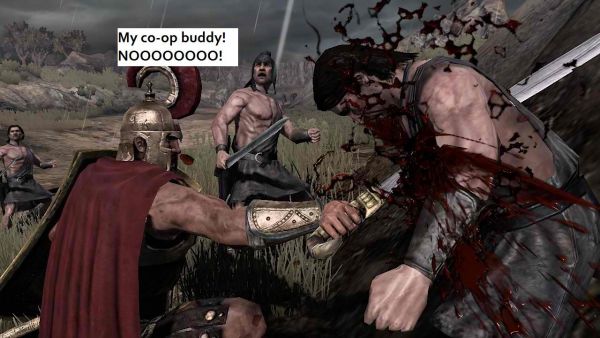 Warriors: Legends of Troy was shaping up to be a fun new take on the well-worn (some would say threadbare) Dynasty Warriors formula. Instead of ancient Chinese warriors, samurai, or Gundam mechs, players were going to take control of ancient heroes of the Trojan War.  Greek gods were going to make an appearance, adding a supernatual element to the game.  Players can still look forward to Warriors: LoT, just don't expect to play together. A Tecmo-Koei representative confirmed that the developers originally planned to support co-op, but the game is a single player experience now.

This is the first Dynasty Warriors-style game to be shooting for an 'M' rating, and the screen shot above shows the beautiful, beautiful blood.  No reason was given for dropping co-op, but I suspect it was done on a personal level, specifically to infuriate all of us.  The game is due out March 8th, 2011 after almost a year of delays, so the chances of them sneaking it back in are slim.