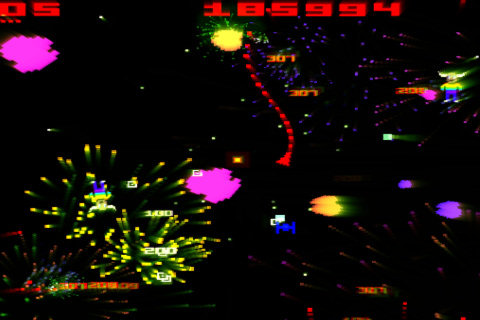 Jeff Minter is firmly stuck in 1984 with retro graphics and gameplay.  His latest releases all followed a similar style in titles like 1994's Tempest 2000 and more recently Xbox Live Arcade's Space Giraffe.  What's up with throwing random creatures in space Jeff?

The latest creation from his company Llamasoft is called Minotaur Rescue.  In this 8-bit game that is equal parts asteroids and acid trip - you play as a little triangle trying to rescue randomly floating minotaurs in space from UFOs, asteroids and other nefarious space things.

The iPhone version supports two player co-op on the same screen - simply touch and move your arrow around to shoot things with a friend.  It's a bit cramped, but it works surprisingly well.  On the iPad you have four player support and a lot more screen realestate to work with.  The game is only $1 so give it a whirl, just watch out for flying space hippos.